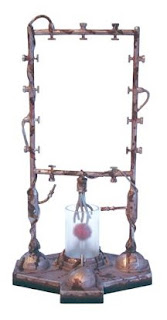 What is the least popular of the current batch of Doctor Who action figures? If the closing down sales in Woolworths were anything to go by it was the Destroyed Cassandra, a toy which rather looks like the sprue left over when you have finished an Airfix kit.

The Lady Cassandra O'Brien was the brain and stretched skin of the last living human and was voiced by Zoë Wanamaker. She first appeared in the ninth Doctor story The End Of The World and then reappeared in the tenth Doctor story New Earth. The Destroyed Cassandra toy is her frame from New Earth after her skin had snapped off it, so it could be said that it wasn't so much a toy figure as a toy prop. It certainly seemed to be the only Who figure that no one wanted to buy, even at drastically reduced prices, in several of the Woolies stores as their stock contracted during their closing down sales.
Despite this we will raise a paper Doctor Who cup to the memory of Woolworths - a cup from a pack of eight bought at 70% off the recommended price on the penultimate day of the retailer's existence.
Posted by Jeremy Briggs at 8:56 pm

Sad to see Woolworths go. That Cassndra toy must surely count as one of the worst Doctor Who toy releases ever, up there with the green K-9 Dapol put out...

Harrogate Branch of Woolies had loads of them left too. This was the worst kind of Dr Who merchandise - some Dr Who fans are completists by nature and this piece of tat just exploited tha fact.

Looking at it, it could have made a great photo/ picture frame ;)