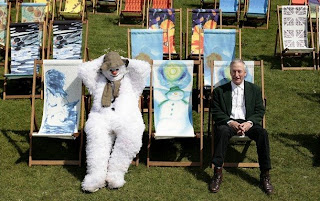 Alex Fitch of ResonanceFM and Panel Borders has been in touch with information on his new broadcasts / podcasts:

On Air Now: Strip - The work of Raymond Briggs

The UK's only weekly radio show about comic books returns after a three week break for Christmas and the theme of this month's shows is four generations of British cartoonists. Later episodes this month will feature Alex Fitch's interviews with Peter Doherty (not the Libertine!), an underrated Judge Dredd artist from the early 1990s to the present day, an up and coming young artist called Marc Ellerby who is currently featured in a group show at Brent Museum; and with Alan Moore and Pat Mills about their favourite cartoonist, the late Ken Reid, who drew classic humour strips such as Faceache, Frankie Stein, Roger the Dodger and many others.

This week Alex is talking to the beloved British children's illustrator Raymond Briggs, creator some of the most treasured kids books of the late twentieth century such as The Snowman, Father Christmas and Fungus the Bogeyman.

In the second episode of the new series of Resonance FM's weekly show about Asian Culture, alongside examples of the region's music and food in the "dim-sum lunchbox", presenter Zoe Baxter will be talking to Alex Fitch and Dan Lester from Electric Sheep Magazine about the films of Tetsuya Nakashima, including Kamikaze Girls (which is this season's comic strip review in ESM by Dan) and Memories of Matsuko, which showed at a recent Hectic Peelers screening. Regular listeners of Lucky Cat may have heard Alex cameo on the show before, tasting some of Zoe's previous dim-sum lunchboxes live on air!

A reminder that the Electric Sheep Magazine -- Winter issue 2008 -- is available in shops now and features reviews of Hansel and Gretel / Captain Eager and the Mark of Voth by Alex Fitch, and Lady Snowblood / Far North by Virginie Selavy. Alex also looks at the Christmas Trilogy by Tim Burton (Batman Returns / The Nightmare before Christmas / Edward Scissorhands), there's a comic strip review of Kamikaze Girls by Dan Lester and illustrations by Mark Stafford, Lee O'Connor and Tom Humberstone.
Available at all good retailers now and from www.electricsheepmagazine.co.uk/magazine.html

The December electronic issue of ESM is online until the end of this week and includes a review of Patti Smith: Dream of Life by Sarah Cronin with a comment by Ms. Smith herself (!),
John Berra's review of the Italian adaptation of Strangers on a Train - The designated Victim,
Oli Smith's review of The Mindscape of Alan Moore on DVD and a transcript of Virginie Selavy's interview with Asif Kapadia.
Posted by John Freeman at 12:28 pm