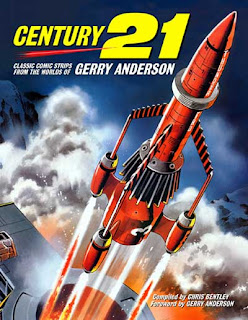 British publisher Reynolds and Hearn are to release two books reprinting strips from TV Century 21 comic and other titles first published by City Editions in the 1960s such as Joe 90.

, they're being complied by regular Anderson author Chris Bentley, who has written the The Complete Book of Thunderbirds

and the The Complete Book of Gerry Anderson's UFO

as well as the The Complete Gerry Anderson, now in its fourth edition.

“This is a subject close to our hearts, and we’ve been working on it for quite a few months,” publisher Marcus Hearn told downthetubes, who kindly supplied us with this exclusive provisional cover, left. “We can’t really describe these books as TV21 compilations because they will also contain material from other publications, such as some of Frank Langford’s work from Lady Penelope and some of Martin Asbury’s strips from Joe 90.

"We've got a team of four designers nearing the end of some pretty intensive restoration, and I think the results are stunning. Gerry Anderson has been working with us since day one, and has written the introduction to Volume One.”

The two 160 page softcover books are currently scheduled for publication on 31 March 2009. 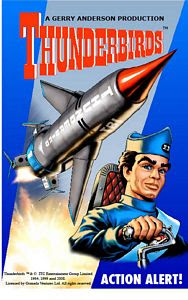 Back in September we told you about the second of FTL Publication's Thunderbirds novels. With the first novel Countdown To Action! released earlier this year, the second novel Action Alert! is now available.

Both novels were written by Joan Marie Verba and are officially only available in the United States and Canada under the terms of the license FTL have with Carlton, the Thunderbirds copyright holder. This hasn't stopped copies arriving in the UK via Amazon.com and from UK based Gerry Anderson dealers. The first chapters of both books are available to read on-line, with Countdown To Action! here and Action Alert! here. 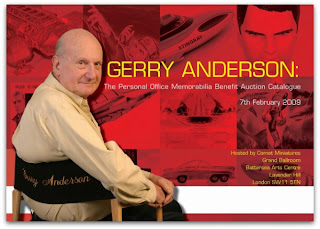 And finally to the man himself. Gerry Anderson will be 80 on his next birthday but still has no plans to retire. He has maintained an office at Pinewood Studios for the last number of years which is where he was interviewed for the Dick Spanner PI DVD extra.

While there has been many rumours over the last year that he has been talking to ITV about a new series nothing has yet been confirmed. That said, Pinewood Studios management have told Gerry that they don't have space for the foreseeable future to house a production of the scale he expects, so he is downsizing his office there whilst he waits a production green light and then looks for alternative studio space.

Now, Fanderson, the Gerry Anderson Appreciation Society, have announced an auction of the contents of Gerry's current office to be conducted by Comet Miniatures. The auction will take place in Battersea Arts Centre in London on Saturday 7 February 2009 and there are more details on the Fanderson website.
Posted by Jeremy Briggs at 8:00 am