Dragons, Duels and Deadly Danger in The DFC! 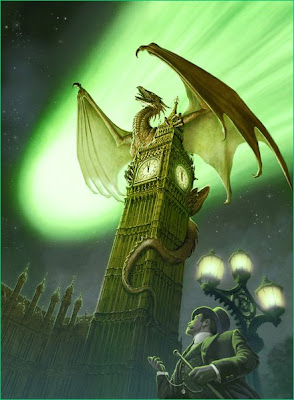 Mirabilis: Year of Wonders is a new ongoing series that starts in Issue 30 of Random House's comic subsscription-only weekly comic The DFC on 19th December.

Written by Dave Morris and illustrated by Leo Hartas, the series tells of a lost year forgotten by history "sometime between Victorian and Edwardian times" when a green comet appears in the sky. As the comet grows brighter, the barriers between reality and fantasy begin to break down, unleashing a tide of mystery, wonder and supernatural excitement. Intrepid hero and former grocer's delivery boy Jack Ember is sent by the eccentric boffins of the Royal Mythological Society to investigate strange happenings all over the world.

Despite the constant incursions of folklore, myth, horror, fantasy and outright whimsy, Jack soon finds there is nothing in the world more perplexing than girls - in particular Estelle Meadowvane, the beautiful young amateur astronomer who discovered the green comet.

The series unfolds in five-page episodes which will later be collected in graphic novel format as the four seasons of the Mirabilis year. The whole story,written by Morris and illustrated by Hartas is planned to run to an epic 56 episodes.

The pair dreamed up the entire Mirabilis concept between them one evening as a love letter to the brilliance of human imagination and storytelling, and in particular to their creative heroes Lord Dunsany, Steve Ditko and Neil Gaiman. They spent ten years looking for the right form to tell the story, and a publisher who could really appreciate the head-on collision of witches, robots, undersea kingdoms, airships, ghosts, aliens, pterodactyls, homicidal saints and man-eating plants. Luckily, along came just the man they needed: UK publishing visionary David Fickling, who seized on Mirabilis with gusto and immediately saw that it would make a perfect ongoing series in his weekly comic The DFC.

, coincidentally reissued this month. They thrash out the overall storyline together, then Dave writes the scripts for each episode and gives them to Leo along with his own "thumbnail layouts" to show what he's got in mind. Leo then quickly works up a rough pencil version of the episode, they discuss any changes of camera angle or text that might then be needed with series producer Tom Fickling, and Leo then goes straight to finished art.

A final touch of magic is applied in Athens by internationally renowned colorist Nikos Koutsis. For the final page layout and word balloons they use Serif PagePlus, with fonts from Blambot. The covers are being painted by Martin McKenna.

• For more stunning art and information about the series visit www.mirabilis-yearofwonders.com

• The DFC is published every week by Random House and for the time being is available only by subscription - see www.thedfc.co.uk
Posted by John Freeman at 3:06 pm