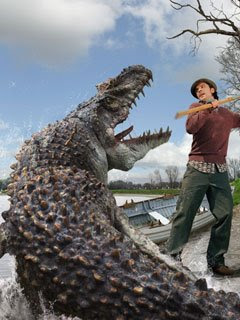 Card and wrapping paper company Gemma International are to launch a range of greeting cards inspired by top ITV show Primeval in January.

LicnesingBiz reports the collection will consist of age cards for six to nine year-olds, a no-age card, a sticker card, a moving picture card, a pop-up card, male relations and gift wrap.

The range will launch in January to catch the start of the third season of Primeval, which is due to begin broadcasting from February on ITV.

With all this interest in the show, can a comic-magazine be far behind from some savvy publisher?
Posted by John Freeman at 1:19 pm