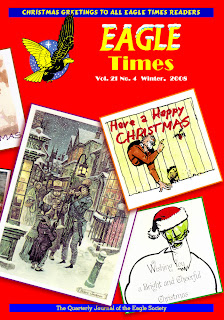 The Christmas issue of the fanzine devoted to the original Eagle comic, Eagle Times, published by The Eagle Society, is now available.

Volume 21 Issue 4 includes articles on artists Tony Weare and Ian Kennedy, the first part of a series of features on Frank Bellamy's Heros the Spartan, beginning a review of Eagle's popular 1960s sword and sorcery strip.

The issue's "I was there" feature covers the launch of Denis Gifford's Ally Sloper Magazine in 1976 and there's more onthe title's 2nd issue dummy, including Norman Thelwell's Pop Milligan and Frank Hampson's The Great Adventurer.

Joan Porter's recollections of the Bakehouse Studio in the 1950s also feature, as does Part two of The Career of Ian Kennedy from the eighties to the new millennium.

Membership of The Eagle Society is via Annual Subscription to Eagle Times magazine, which is published four times annually. The Subscription rate for 2009 is UK £22, Overseas £34 (paymenst must be in £s Sterling, please)

• More information on the new issue via the Eagle Times blog
Posted by Jeremy Briggs at 1:00 pm