In Review: Dick Turpin And The Restless Dead 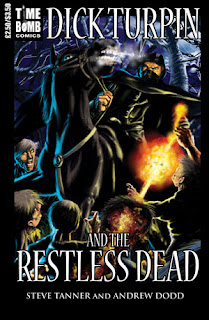 A break from the keyboard and other projects have jointly conspired in my attempts to write this review of TimeBomb Comics' Dick Turpin And The Restless Dead, written by Steve Tanner and drawn Andrew Dodd.

Notorious highwayman Dick Turpin stumbles across a deserted village following his latest highway robbery, and it seems the ideal place to hide out. But the village is not as empty as it first appears – and Turpin soon finds himself surrounded by hordes of rotting, hungry zombies!

This straightforward action-horror yarn is a change of pace from the intricacies of Timebomb's first title, Ragamuffins:
Stitches in Time, but zombies and the darker, grislier setting rather suit Andy Dodd's 'scratchy' art style (and I don't mean for that description to sound derogatory). Turpin himself is an interesting choice of anti-hero, and there's no doubt he's a villain at heart from the get-go, as the book opens with his hold up of a stagecoach.

The script is fun with a serious edge although I'm sure the closing line is a homage to a film, but I can't think which one. While there are some odd choices of panel -- Andrew favours mid shots with few close ups which I think is to the detriment of some pages -- this is fun one shot worth checking out from either the publisher's web site or the company's other distributors.

• You can read the first five pages of Dick Turpin and the Restless Dead on TimeBomb Comics' ComicSpace gallery.
• Visit the official TimeBomb Comics web site
Posted by John Freeman at 1:17 pm