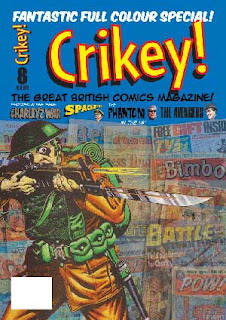 As reported here last month, Issue 8 is a milestone edition for British comics fan magazine Crikey! with this 52-page issue published in full colour throughout.

"So far, the response has been tremendous and the issue has only been on sale for a few days," editor Glenn B Fleming told downthetubes, who also revealed more of the title's latest contents.

"As usual Crikey! has a varying choice of articles: Tony Ingram's always sensational Nutty Notions leads the way, then there is a fantastic review of the 'zine Spaceship Away featuring all things Dan Dare.

"Charley's War brings the attention back to superb comic writing and even better artwork, as we present an overview of Pat Mills' and Joe Colquhoun's amazing adaptation of the Great War.

"If that's not enough for you how about this: Crikey! enjoys a remarkable relationship with comics giants DC Thomson and they kindly gave us the go-ahead to publish (for the first time in almost half a century) some stunning Avengers artwork by Spanish artist Emilio Fejo Abegon. Not to be outdone, British artist Mike (The Cloak) Higgs gave up his time to draw a four page, full colour 'Comicy Saturday' for us - it's hilarious and a 'must see'!"

There are other articles and amongst them is the British 'Mickey Mouse' invasion and Peter Hansen's 'The Best of British' covering almost a hundred years of comics artists and their work. Issue 8 even brings an American hero into the realm of British Comics: The Phantom in the UK!

"We don't know at this point if the next issue of Crikey! will be in colour," says Glenn, "but we do know that Issue 9 brings exclusive chats with Modesty Blaise artist Romero and David 'V for Vendetta' Lloyd - watch out for that then!"

• More info at: www.crikeyuk.co.uk
Posted by John Freeman at 3:09 pm