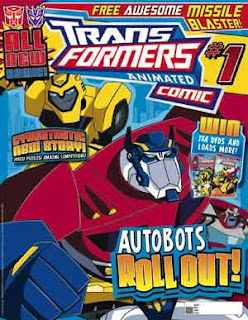 On sale later this month is Transformers Animated #1 from Titan, the company's new tie-in with the latest animated incarnation of the phenomonally successful robots-in-disguise toy franchise.

The first issue, on sale from 23 October, includes ‘Sideswiped’, one of two new comic strip adventures, in which New Detroit is at risk from a villain who has the Autobots quaking in their boots – literally! Luckily, there’s a new bot on the block to help out.

The issue comes with some cool Optimus Prime pull-out posters and a free wrist blaster, joining Titan's Transformer Comic on the stands of all good newsaganets. Issue 17 of Transformers Comic is a giant-size issue on sale this week (9th October), and comes with free a free Roto Blaze Launcher.

• More info on Transformers Animated on the Titan web site
Posted by John Freeman at 4:33 pm