Doctor Who Stand-Up Returns to Lancaster 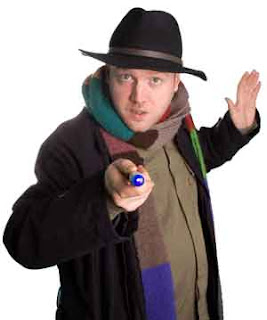 Top comedian and actor Toby Hadoke returns to the Dukes, Lancaster this month with his hilarious hit show, Moths Ate My Doctor Who Scarf.

This razor sharp comic odyssey, at The Dukes on Saturday 18 October (and will also be performed at other venues in places such as Belfast and Keswick, see below), charts the rise, fall and rise again of the TV legend. A must for anyone who has ever had a passion for anything, this critically acclaimed show has delighted even those who've never seen Doctor Who.

Eagle eyed audiences may remember Toby from his performance at The Dukes in The Talented Mr Ripley four years ago.

"Last time I came to The Dukes I died on stage," Toby recalls. "I hope not to repeat that experience!

"To be fair though, I was supposed to, stabbed to death by an extremely talented Mr Ripley: as fat Freddie Miles, I had to wear significant amounts of padding, to bulk out my girth. Time has not been particularly kind though, and nowadays such padding would be unnecessary.

"I loved being in Lancaster and thoroughly enjoyed my stint at The Dukes, so I look forward to getting the audience aboard my time machine of mirth."

Moths Ate My Doctor Who Scarf was a complete sell out at Edinburgh festivals in 2006 and 2007 gaining five star reviews from all press, leading to a recent acclaimed West End run.

Toby is an actor, writer and stand-up comedian. As a stand-up, he has been resident compere of the multi award winning XS Malarkey Comedy Club in Manchester for over a decade. His television acting credits include The Forsythe Saga and Phoenix Nights and he also has made many appearances on stage around the country.