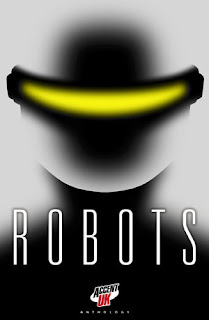 If you haven’t already picked up a copy of British independent publisher Accent Press’s 2008 anthology Robots, then you’ll get another chance this weekend at the Birmingham International Comic Show.

A 200 page beast of a collection, with over 50 creators from around the UK, the anthology clearly highlights Dave West and Colin Mathieson’s continued dedication to showcasing the work of both professional creators and new talent.

Although many of the strips revolve around common themes, such as slavery, eternal life, matters of the soul and the nature of existence, each story is handled in a vastly different manner. Some, like Daniel Merlin Goodbrey’s Robot Heart (about a man with a heart that can transform into a robot jetfighter, with unforeseen side effects), play it strictly for laughs, whereas others like Paul Harrison-Davies' MY Robot (also viewable as a ROK Comic) take a more emotional route.

Benjamin Dickson looks to philosophy for inspiration, and presents an interesting dilemma when a man is confronted over breakfast by a talking toaster that believes itself to be God.

What is Life? by Kieren Brown and Kevin Mullins tells a well written and beautifully illustrated story about a society of robots attempting to decide whether a five year old human poses too big a threat to their society to be allowed to live.

Dave West proves he’s as talented a cartoonist as he is an editor with a number of amusing offerings (my favourite being Over Engineered – a one pager about a scientist who creates an intricate robot so he can use it to microwave his dinner).

There are, of course, many more gems to be found inside the issue - far too many to list here (but we have in our trail for the book earlier this year). Fortunately there are very few duds; perhaps two or three strips that could have done with a little more clarity in the story telling. With 40 strips on offer inside, that’s not a bad average.

One section of the comic that could quite easily be overlooked is the gallery at the back, containing a vast range of robotic characters that ooze personality and beg to have stories written about them. Particular highlights are Mo Ali’s grizzly hanging robo-corpse, Andy Bloor’s highly amusing Metal Detectives, and James Gray’s Crash Test Dummy revolt.

Accent UK’s Westerns anthology is nearing completion, and you’d be well advised to look out for that one next year. In the meantime, why not give Robots a try? The variety of strips means there’s pretty much something inside for everyone (unless you’re Robophobic, in which case this probably isn’t the one for you).

• Robots is available for £8.50, and can be ordered from the Accent website at www.accentukcomics.com
Posted by John Freeman at 2:02 pm