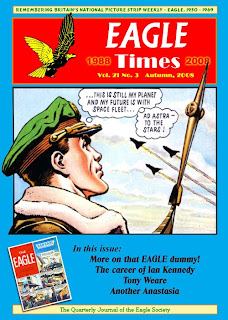 After downthetubes contributor Richard Sheaf's article on the newly discovered dummy issue of Eagle number 2 in the last issue, downthetube's contributions to the 54 page A4 fanzine continue with the first part of Jeremy Briggs' major article on artist Ian Kennedy which covers his career from the 1950s to the 1970s and so sets the scene for his work on new Eagle's Dan Dare in the 1980s.
The new issue also features more on the Eagle issue 2 dummy as well as articles on artist Tony Weare, who turned down the offer to work on Dan Dare, Ron Embleton's Heroes of the West series for Kellogg's cereal boxes, and Dan Dare creator Frank Hampson's time working at NESCOT college. Reviews include the Virgin Dan Dare comic and the Orion Dan Dare audio book Voyage To Venus Part 1.
Eagle Times is published quarterly and is available from the Eagle Society. Current subscription rates are UK £22, overseas £26. More details are available on the Eagle Times Blog.
Posted by Jeremy Briggs at 2:44 pm