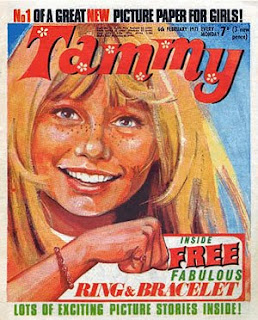 Many years ago, British newsagents were awash with all sorts of comics: boys' adventure, children's titles, educational comics and more. But while humour comics reigned supreme in Britain, and still do, girls comics regularly outsold most of the more famous boys titles most fans remember today.

Sadly their history and success often remains neglected today, much to the chagrin of those who wrote and drew them.

One of the success stories was IPC's Tammy published between 1971 and 1984. Always a title keen on a good weepy, Tammy rivalled DC Thomson's Bunty in sales terms. It incorporated six other titles during its lifetime, including June, Misty and Jinty and introduced readers to strips such as Girls of Liberty Lodge, Slaves of War Orphan Farm and even re-launched the these days decidedly un-PC Bessie Bunter, created decades earlier by Frank Richards.

Now, downthetubes is proud to reveal how Jenny McDade, who today writes animation and children's TV drama (her credits include SuperGran, Mr Majeika and C.A.T.S. Eyes), really became a Tammy writer, one of very few women to regularly write girls' comics at the time. Her first strip was Star Struck Sister, drawn by Giorgio Giorgetti (pictured below).

"Although" she notes, "it probably reads more like a Tammy story - plucky little ditsy blonde with no hope succeeds in the end in cut-throat male-dominated magazine world!..." 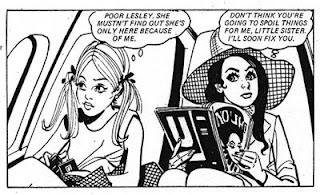 "Just because a female readership isn't as fan orientated as male readers they tend not to be as vocal and organised," says comics writer Pat Mills who authored many a girls story for both DC Thomson and IPC, "but female comic sales sold more than double the number of male comics and those readers have equally valid nostalgia interest.

"In its heyday during the seventies our now iconic Tammy sold 250,000 copies per week, which was more than 2000AD!"

We're delighted to shed some light on just one aspect in the creation of one of Britain's best loved but seemingly forgotten comics genres... Read the feature
Posted by John Freeman at 7:09 pm

I had been known to read my sister's copy...