In Review: The Prison 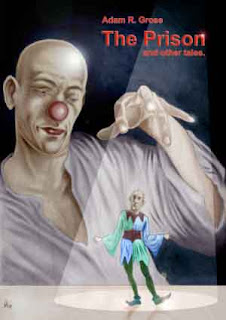 Recently made available to buy at Lulu.com is Adam Grose’ The Prison.

As the description on the back of the collection states, ‘The Prison is an array of stories, prose, poetry and soapbox ramblings based on Adam Grose’ observations.’

In laymen’s terms, this means no zombies, explosions, gunfire, wisecracking monkeys, psychotic cyborgs or ninjas. Just stories which seek to inform the readers as well as entertain.

Adam achieves this by tackling subjects that are most prominent in his mind; the greenhouse effect, war, a failing education system...wherever mankind’s put a foot wrong, Adam steps in to raise questions and attempt to provide answers (in fact, a more fitting title for the collection might’ve been ‘Some More Of Mankind’s Greatest Mistakes’, had Oolon Colluphid not thought of it first).

Although there’s the occasional touch of humour, the stories are mostly approached in a straight-faced, no nonsense sort of way. Generation X,Y,Z is a strip that works well in this manner, presenting various facts and figures to the readers by using internet resources to full effect. ‘The Witch’ – a tale about a lady who makes herbal remedies to heal backache and gets burnt as a witch – proves effective at highlighting mankind’s ignorance through more conventional story telling means.

It’s a pity that the balance between information and entertainment is stacked so heavily in favour of the former, as it can be quite heavy going at times. The subject material occasionally comes across as being a little too preachy; I’d have much rather been left to draw my own conclusions than have the author’s opinions pushed on me so often.

One thing that’s certain is Adam’s very passionate about the topics he covers in The Prison. Whether they’ll mean quite so much to the casual reader is another matter. Still, for those who aren’t interested in saving the planet at least there’s some rather lovely artwork to look at. Adam uses a range of materials from pencil to brush and ink, which perfectly captures the tone of the tales. His graphite pin-ups stand out from the rest of the comic, and exhibit a mature and confident style.

For those readers who seek to be informed, this is probably the one for you. If it’s entertainment you’re after I’d recommend Adam’s earlier works ‘Cosmogenesis’ (also a heavy read, but at least it’s got a gun-totting monkey in it).

• View a prieview of The Prison on Google Books
• Buy The Prison from lulu.com
• Visit the Clown Press web site

Other Clown Press Titles
• Cosmogenesis: The Chronicles of Quongo (e-book: or order the paperback direct from Clown Press)
• Read our review of Cosmogenesis
Posted by John Freeman at 10:25 am

Thank you so much for doing the review. Very much appreciated ;))