Under the Eagle Returns 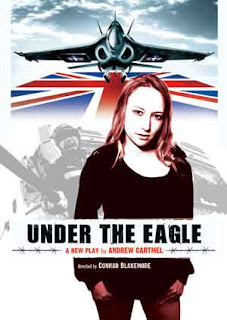 Under the Eagle, a satirical play by comics writer and Torchwood script writer Andrew Cartmel, is to have another run in London.

LS1 Productions will be staging the much-praised show at the White Bear on Kennington Road from Tuesday 26th August — Sunday 31st August.Under the Eagle is a darkly humorous satirical drama exploring the nature of Britain's 'special relationship' with the United States. When stand-up comic Vi Hooper becomes the reluctant guest of the Prime Minister’s wife, she encounters the US President and gains an unexpected insight into the corridors of power.

Time Out described the play as “Bitingly funny” while Tanith Lindon of Extra! Extra!, said the drama was "Insightful and entertaining, a must-see."As well as a playwright, Andrew Cartmel is a screenwriter, television script editor and novelist. He has worked on Dark Knight, Casualty, Torchwood and, most famously, Doctor Who. His novels include Warhead, The Wise and Miss Freedom. His previous play, End of the Night was hailed by What’s On in London as an ‘entertaining, stylish intrigue’.

Claire Amias, Francesca Anderson, Angela Dixon, David Morley Hale, Jonathan Rigby and Eben Young form the cast of the play directed by Conrad Blakemore, who has worked in the fields of theatre, film and photography. His recent productions include The Lodger (Time Out Critics’ Choice), his own adaptation of Strindberg's Miss Julie, both at Pentameters Theatre, Roulette at the Finborough and Happy Christmas at the New End.