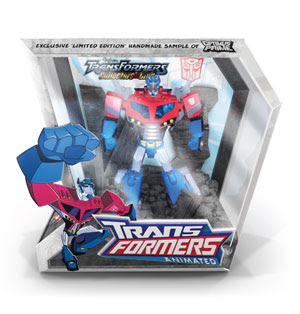 Transformers -- a robot toy range that has spawned several successful comics across the globe down the years and will see the launch of a new UK comic title from Titan in October -- has a massive collector fan base, and owners Hasbro have decided to do something special to celebrate this by offering a once in a life-time opportunity to win some awesome hand made figures of characters from the new Transformers: Animated series.

These amazingly rare figures will be displayed in unique collector cases and will only be available to win through a prize draw on HasbroToyShop.co.uk, and is the first time ever that Transformers figures have been displayed in this way.

The figures up for grabs will be Megtron Deluxe, Leader Bulkhead and Roll Out Command Optimus Prime.

Transformers: Animated, screening on Nicktoons in the UK, is a high-octane, animated action-adventure series based on the beloved 1980s ‘robots in disguise’ of toy and cartoon fame. The Autobots continue their battle against the Decepticons on Earth and this time they have human friends to help them in the search for the AllSpark, such as their energetic 8-year-old guide, Sari Sumdac.

The competition launches on Monday 25 August 2008 and will run until Sunday 14 September 2008. No purchase is necessary and the competition is open to residents in the UK, aged 18 years or over. If you want a slice of Transformers history make sure you log on! 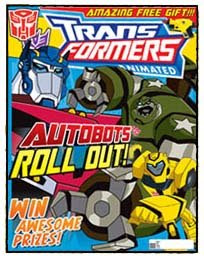 Titan launches its Transformers Animated Comic, complete with wrist blaster free gift, on 23 October, complementing its existing Transformers Comic. The title will include new comic adventures, puzzles, features and more heavy-metal action than you can shake a photon-enhanced Laser Blaster at!