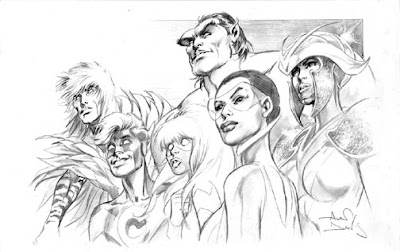 After a prolonged absence from comic shops, Comics International is finally about to return to the stands -- and is offering its readers the opportunity to win a ClanDestine original specially drawn for the competition by British writer/artist Alan Davis, the creator of the Marvel series.

The art (pictured above) can be won in the much-delayed issue #206 of Europe’s comics trade paper, which goes on sale week ending 8th August. Featuring four alternate covers (see below) and priced at the usual £2.99/$4.99, the special 116-page issue includes an interview with Alan about his plans for his superpowered family as well as a host of regular of regular features and numerous other exclusives, among them:

• Famed Cerebus cartoonist Dave Sim talks about glamourpuss – in which he takes a unique look at the fashion industry – and Judenhass, which shines a disturbing spotlight on the Holocaust 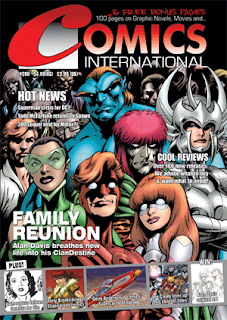 about his new self-published series, Echo.

• Writer Joe Casey speaks about the challenge of resurrecting Rob Liefeld’s Youngblood, his own Image graphic novel, Nixon’s Pals, and writing The Last Defenders for Marvel. In addition, artist Chris Burnham talks about how Nixon’s Pals was developed.

• Original Hellblazer writer Jamie Delano talks comics and in particular Narcopolis, the Avatar four-parter he describes as being “in the territory of adult horror/fantasy”.

• From Four Feather Falls to Stingray... Comics International's ongoing in-depth examination of TV SF in British comics continues with the second of six installments focusing on strips based on shows from Gerry Anderson, the man who made SuperMarionation a household word.

It's good to see the magazine finally back on the stands and let's hope the title is finally over its production difficulties and back on a regulat schedule at last.
Posted by John Freeman at 8:53 am