In Review: The Mammoth Book of Best Crime Comics 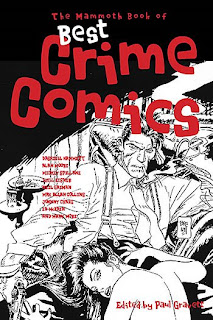 Considering crime comics as featured in this collection span some 80 years of the medium's history, I can't begin to imagine how hard it must have been for Paul Gravett, editor of The Mammoth Book of Best Crime Comics, to whittle his choices down to the excellent selection featured in this book.

Sandwiched between two great crime-inspired stories by Alan Moore ("Old Gangsters Never Die", drawn by the much-missed-from-comicdom Lloyd Thatcher - where is he now? - and "I Keep Coming Back" Oscar Zarate) are 22 more top tales. These feature the work of creators such as Neil Gaiman, Will Eisner, Max Allan Collins, and Mickey Spillaine, the latter at his nastiest with the truly hard boiled Mike Hammer, just one of a host of characters many will recognise such as The Spirit, Ms. Tree and Agent X-9.

Superbly restored, albeit for one unfortunate page transposition in the X-9 story, the choice of stories is a delight, from straight mystery with Bernie Kriegstein adapting an 87th Precinct Mystery, "Blind Man's Bluff", originally penned by Ed McBain, to the creeping horror of crime-does-not pay tales from Johnny Craig ("The Sewer") and Jack Cole ("Murder, Morphine and Me"). These veteran tales are neatly balance with modern stories from the likes of Paul Grist ("Kane: Rat in the House") and Gianluigi Gonano and Gianni De Luca ("Comissario Spada: The Street").

This is the kind of well put together, lovingly designed collection that not only delivers a great rad but leaves you wanting to track more from the creators featured. If crime comics are new to you but you fancy more than superhero fare, you'd be well advised to give this a try and find out what you've missed. If you are a crime comics fan, then The Mammoth Book of Best Crime Comics may well send you hunting for creators you'll discover here for the first time. Recommended.

Other Links
• Listen to an MP3 of "Old Gangsters Never Die"