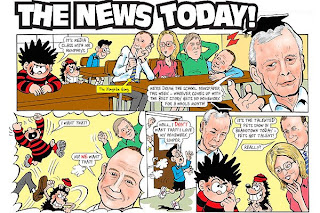 Wallace & Gromit creator Nick Park and Beano editor Alan Digby were interviewed on BBC Radio 4's Today programme this morning, part of the ongoing celebrations for the weekly comic as it fast approaches its 70th birthday.

Park, who is guest editing the 70th anniversary issue this month, again waxed lyrical about the Beano's timeles quality, feeling that like it or not the comic was part of Britain's cultural identitly while Digby (who quickly denied the Beano had any culture!) explained the title's longevity as being down to having its own sense of identity and never becoming a slave to contemporary fashion.

The Today team have joined in the birthday fun by becoming part of a special comic strip, Humphrys and the Naughtie gang, which you can read on the programme's web site but will also feature in an upcoming issue of The Beano.

Presenter James Naughtie, usually something of a ferocious pack animal when it comes to top politicians, was clearly delighted by the upcoming appearance and far from his normal acerbic self during the piece!

• Listen to the interview with Nick Park and Alan Digby
• Read Humphrys and the Naughtie gang
Posted by John Freeman at 8:52 am