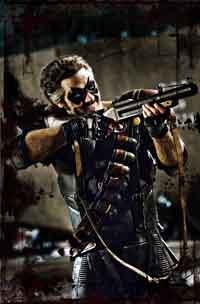 The official blog for the Watchmen film, due for release in the US 6 March 2009, has just published several character sketches from the new movie based on the designs created by British artist Dave Gibbons for Alan Moore's seminal graphic novel.

Filming is now complete and director Zack Snyder says he is delighted with what's in the can now production has wrapped.

"A film adaptation of Watchmen has been in the works for almost 20 years," he says on his blog, thanking the cast and crew on the project, "and thanks to you, it is finally in the can. It has been such a pleasure to be surrounded by a team that is so dedicated and that has given 110% each and every day. I am extremely grateful for the level of attention to detail put forth by each department to capture all of the texture that makes Watchmen the incredibly unique property that it is.

"Although we still have a lot of work to do in post, the shoot has been an experience I will not soon forget!"