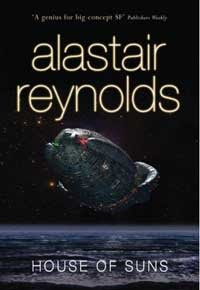 Alastair’s first novel Revelation Space was published in 2000 and was short-listed for the BSFA and Arthur C. Clarke awards. His second novel Chasm City won the BSFA in 2002. Up until 2004 he was working as a scientist within the European Space Agency, and after living for 16 years in the Netherlands he has now returned to his native Wales.

House of Suns begins six million years ago, at the very dawn of the starfaring era, when Abigail Gentian fractured herself into a thousand male and female clones: the shatterlings. Sent out into the galaxy, these shatterlings have stood aloof as they document the rise and fall of countless human empires. But now something is trying to destroy them and they have to find out who or what it is before their ancient line is wiped out.
Posted by John Freeman at 3:48 pm