Almost passing me by, just a quick note that BBC3 has ordered a full run of tongue-in-cheek kung-fu drama PPhoo Action.

Series creator Jamie (Tank Girl) Hewlett is working on six sixty minute episodes (which will hopefully be a lot better than the pilot!), which will be filmed in Glasgow by BBC Scotland, based on the comic strip Get The Freebies which appeared in The Face magazine.

Broadcast reports that BBC3 controller Danny Cohen's swift decision was prompted by the need to secure cast members Winstone and Shin before they signed up to other projects, but there's no word yet on whether Rocky star Carl Weathers, a casting coup in his role as Winstone's father, Police Chief Benjamin Benson, would return.

"We commissioned Phoo Action because it was original and bold," a BBC3 spokeswoman said. "We needed to exploit artist options before we ran out of time." The pilot secured 231,000 on airing as part of a revamped BBC3 line up, a 1.1% audience share. 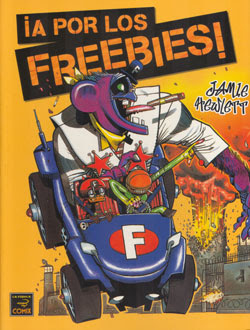 Phoo Action was one of six one-hour pilots that have or will air on BBC3 in coming weeks. Any of them -- including the quite enjoyable Being Human, about a house sharing ampire, werewolf and a ghost - could still get a commission for a full series.

Get The Freebies has yet to be collected in English, although there is a Spanish edition, and comics commentator Rich Johnston did run some samples of the strip in one of his Lying in the Gutters columns over on Comic Book Resources.
Posted by John Freeman at 4:34 pm

Email ThisBlogThis!Share to TwitterShare to FacebookShare to Pinterest
Labels: BBC