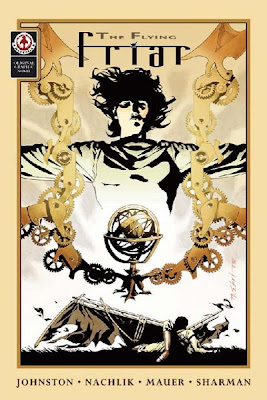 Thursday 1st November is All Saints Day in the UK. What better date to choose for The Flying Friar to return to print, now in full colour, from Markosia?

Created by British gossip columnist Rich Johnston and German illustrator Thomas Nachlik, The Flying Friar, which we first reported on last year, tells the true story of a 17th century Italian saint mixed with superhero myth. A man who discovers he can fly, only to be investigated by the Inquisition and the Church he loves so much. And his best friend, and grand nephew of Martin Luther, Lux Luther, becomes his worst enemy. A story of religion versus science, friend versus friend, of greed, corruption, power and superpowers.

And it all happened 400 years ago.

Giuseppe Desa was born in Copertino, in the heel of Italy, in 1603. Later, as St. Joseph of Copertino, he became famous as the "Flying Monk" because of his remarkable levitations during ecstatic states.

As The Times reported last year, when a black and white edition of the book was released, the story of St Joseph, today the patron saint of air stewards and pilots, bears a startling resemblance to modern fictional heroes such as Batman or Spider-Man. Joseph Desa was initially an outcast, born into such extreme poverty in 1603 that he was delivered in a shed. He seemed to be a simpleton and was nicknamed The Gaper because of his habit of wandering around open mouthed.

“The tradition of superheroes goes back to Greek mythology and the Bible,” Mr Johnston told The Times. “Modern superheroes follow on from that, although they tend to come from science rather than religion.”

The Flying Friar has been described by Warren Ellis as "Smallville by way of The Name of the Rose", while news site Aint It Cool News called it "beautiful, beautiful stuff", and Newsarama described it as "one of the best and, given our current American culture's fear of offending anyone when it comes to discussing religion, ballsiest Elseworlds stories that DC never published."

While the UK have the book for All Saints' Day, it is expected in North America in two or three weeks' time. Until then, there's a preview of the comic, with colour by Ian Sharman, and lettering by Thomas Mauer, available on www.flyingfriarcomic.com.

The Flying Friar is published by Markosia Comics and will be available in all good comic shops. If your nearest shop doesn't have a copy, give them the order code: AUG073845 and they should be able to supply you with a copy shortly.

• More about the history of the Flying Friar
Posted by John Freeman at 10:46 am