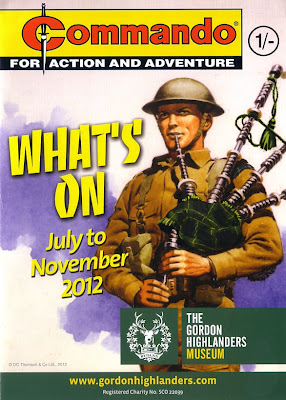 The museum is holding an exhibition entitled Steadfast! Commando at the Gordon Highlanders Museum from 9 July to 30 November 2012, named after the English translation, Steadfast, of the regimental motto, Bydand. Jesper told Jeremy Briggs about the background to the exhibition the museum and why he wanted to hold an exhibition of Commando artwork.

DTT: Could you tell me a little about the regiment and the museum?
Jesper Ericsson: The Gordon Highlanders was one of the most famous infantry regiments of the British Army in its 200 years of existence (1794 - 1994), seeing service from the Napoleonic Wars, India, the North West Frontier, Afghanistan, both World Wars through to Malaya, Cyprus, Borneo, Northern Ireland and Bosnia. The Highlanders, 4th Battalion The Royal Regiment of Scotland, is the current unit that includes in its antecedent history The Gordon Highlanders.

The Museum is a 5-Star Museum, one of only two in Aberdeen, and we are a completely independent self-financing charity. Because the number of core staff is so small, we would be lost without our extraordinary and loyal volunteers. We currently have around 180, who help in the tea room, guiding, collections, research and the garden. Many are Gordon Highlanders, some even who served in the Second World War, whereas others may have had family who were in the Regiment. Others come from different branches of the military and many have no connections to the Regiment at all! The Gordon Highlanders was very much a family Regiment, and that is how it still feels at the Museum thanks to our volunteers.

DTT: Did you read comics as a child and, since you became the curator of a military museum, were war comics a particular favourite?
Jesper: I can safely say that reading comics such as Battle, Warlord and Commando set me up for where I am today! I think I was about 9 or 10 when I discovered war comics, and have kept all the issues I ever bought. As a kid growing up in Cambridge, I still remember cycling down to the market in the middle of town on a Saturday morning, heading for a particular book stall that sold second-hand Commando comics for 10p an issue, 5p if it wasn't in the greatest of condition. Then after buying 10 - 15 issues, it would be back to my local newsagent to pick up my issue of Battle or later Battle Action Force, then home to devour the stories and artwork!! Up in the loft I've got hundreds of issues of these three titles and I still look out for old comics at car boot sales or second hand shops, and buy new ones every month, so the interest and buzz of seeing amazing new artwork and stories has never left me. 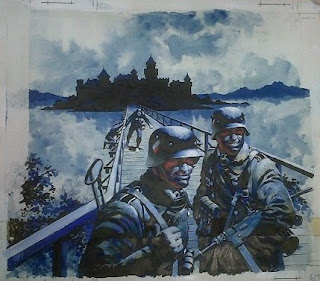 DTT: Why chose to put on an exhibition of Commando artwork in the museum?
Jesper: This is pretty much my dream exhibition, it's as simple as that, and when Calum Laird, Editor at Commando gave me the opportunity to loan artwork I absolutely leapt at it!

DTT: How did you choose the artwork that is on display and does it have any themes?
Jesper: Choosing covers was both incredible and nightmarish. For every cover that was chosen, I could have happily picked a dozen more! There are themes - for example alongside the Commando display I've curated a special exhibition about The Gordon Highlanders in North Africa, in particular the Battle of El Alamein since it's the 70th anniversary of the battle later this year. In this special exhibition room, I've got quite a few desert themed covers, including issue 1 'Walk - or Die!' In the corridor outside, where the main Commando display is, it's a wide variety (air, sea and land) to try and show a 50-year sweep of what Commando is all about - from classic covers to some more unusual ones. I've also picked several with a Scottish theme to throw in the mixture. You'll have to come and visit to find out more! 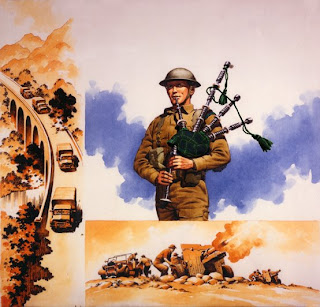 DTT: The publicity for the exhibition includes an image by Ian Kennedy of a piper, what is the story behind this?
Jesper: Yes, this is brilliant. When I was going through the covers, in the back of my mind I was looking for a 'poster boy', for want of a better expression. Then I came across this cover by Ian Kennedy from issue 2349 'Warrior Blood', published back in 1990 and never reprinted, and thanks to some wizardry from the Commando design team, he was magicked into a Gordon Highlanders piper! We're very chuffed with him indeed, as he's completely and utterly unique to us.

DTT: Will the museum have any events relating to the Commando exhibition during its run?
Jesper: Most definitely. At 1pm on Monday 9 July, we've got a 'Meet the Commando Team' event at the Museum. This is completely free, but needs to be booked. We're hoping to see editor Calum Laird, deputy editor Scott Montgomery, graphic designer Grant Wood, former editor George Low plus artists Ian Kennedy and Gordon Livingstone, who will be taking questions and signing comics, so I'm really looking forward to that as you can imagine. We have also got art classes and other activities planned. The best place to look is the events page of our website, as any updates will be announced there first.

DTT: Jesper, thank-you for your time.

The Steadfast! Commando At The Gordon Highlanders Museum runs from 9 July to 30 November 2012. Entrance to the exhibition is included in the normal museum admission price.

There are more details of the Gordon Highlanders Museum at the museum website and an up-to-date listing of all the museum's events in the website's events section.

There are more details of Commando at the official Commando comic website.
Posted by Jeremy Briggs at 7:00 am