Strip Magazine to re-launch in September

Print Media Productions has reluctantly decided to delay its planned news stand launch of STRIP from June until September 2012. 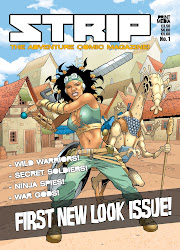 The decision follows discussion with the company's news stand distributors, who suggested that the autumn would be a far better time for the new incarnation to hit the newsagents.

Speaking as the title's editor, there are also vital issues that need to be sorted out, especially a guaranteed delivery cycle from Print Media in Bosnia. Both myself and Mike Conroy, who is advising us on administration matters, discussed the situation with publisher Ivo Milicevic, who has bankrolled the project so far, and agreed the logistics of getting the first issue of the new incarnation printed and into the shops for our planned launch date were simply insurmountable at this time.

Once STRIP Issue 5 - a giant-sized issue - is released in comic shops in the UK next month (again, later than planned), STRIP will take a summer break.


While you're waiting. check out this great cover for the new look magazine by Bernhard Kolle.

Bernhard hails from Croatia but lives and works n Lubljana, Slovenia. He began his career drawing horror comics for the American market and drew the comic books Conny and Gespenster Geschichten between 1988 and 1996 for Germany's Bastei Verlag. Between 1996 and 1999 he was back drawing horror stories for Dark Horse titles like Ghost in the US before returning to Bastei and Gespenster Geschichten to draw Maddrax and Vampira.

As well as covers for STRIP, he's working on an action adventure story for the title.


- STRIP - The Adventure Comic Magazine Issue 1 Volume 2 has been solicited in Diamond PREVIEWS for September 2012.

I am going to treat the big issue 5as a summer special and buy myself an ice lolly to eat while I read it. Maybe a bottle of pop as well.

Bill Fleming aged 48and a half.

Well, I prefer a clear and frank answer from the pros of distribution. It is true that September is THE month were numerous new issues are published.
I think that it is also the best period to launch a comic magazine. And, in that way, Ivo and you, john, will have enough time to prepare this new launch with the news agents.
I will also treat this big issue as a Summer Special, buy a huge pot of ice cream and for the drink, an Orangina Bad Jack bottle!!
I am not annoyed at all for the late publishing. The essential is to have the magazine in my hands!! :)
Keep going!!!