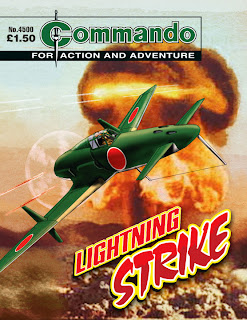 2011 was an important year for Commando with the 50th anniversary of the title, two separate exhibitions of artwork at the University of Dundee and London's National Army Museum, winning the Eagle Award for Best British Black and White Comic, and an increase in the number of issues published each year from 96 to a remarkable 104 at a time when other titles were being cancelled or their frequencies reduced.

2012 has seen the title move to much higher quality paper resulting in each new issue being twice the thickness of the previous format without increasing its page count, the reprint issues being themed as Gold Collection (reprinting 50 year old stories) and Silver Collection (reprinting 25 year old stories), and the art exhibitions continuing with a new presentation of artwork due to be unveiled in the Gordon Highlanders Museum in Aberdeen in July.

This week also sees the title reach its 4500th issue with Lightning Strike, written by Alan Hebden and illustrated by John Ridgway. 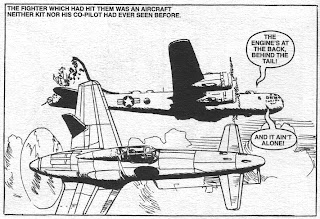 Japan, 1945: the B-29 Superfortress bombers of the United States Army Air Force are within range of the Japanese home islands. However they don't have it all their own way as three B-29s preparing for a special bombing run are attacked by the new Japanese Shinden super fighters which shoot two down and leave the other limping to a Soviet airfield. Before it crashes there it is able to disarm and jettison the atomic bomb that it was carrying near to the Japanese island that the Shindens are based at. The Japanese retrieve the bomb while the Soviets, having seen the Hiroshima and Nagasaki explosions, put two and two together and, despite Japan's surrender, decide that they must retrieve the bomb from the island that has just surrendered to a small SBS team. In this first round of the Cold War, the Anglo-Norwegian SBS team must ally themselves with the Japanese to prevent the Soviet Navy capturing the American atomic bomb.

Shinden is the Japanese word for lightning and while they may look like fictional aircraft they are in fact real, although only two prototypes were built before Japan surrendered, while the modification that they receive towards the end of the story is actually how Sweden modified their similar looking Saab 21 fighters. Alan Hebden is able to take a myriad of disparate facts about the end of the Pacific war and combine them together into a tale that speeds along without ever really taking the obvious direction as the balance of power between the protagonists rarely leaves any of them with the upper hand for long. 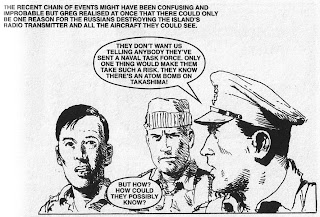 John Ridgway's modern sketchy style of art works well on the tale and his aircraft are nicely accurate, especially at the beginning when the Shinden attack the B-29s. While those who do not read Commando regularly may still be surprised by the 'credit grenade' on the first page, it shows how far DC Thomson have come from their no credits days that John now even gets to sign his work.

Today Commando may look at first glance to be much the same as it was half a century ago but with the move to thicker paper, credits for the writers, artists and even the editorial team, and the publication date on the back cover as well as the official website, much has changed. As for the price, in 1961 at one shilling it was noticeably more expensive than its weekly rivals while today, at £1.50, it is noticeably cheaper.

If you haven't read a Commando in a while then issue 4500 Lightning Strike is worth a purchase, if only to find out just how much Britain's longest running adventure comic has actually changed since the last time you read it.

Commando is available at WH Smiths, Easons and other high street newsagents.

Details of subscribing to Commando are available on the DC Thomson website while the DCT online shop sells reprint books, CDs and metal signs of cover art.
Posted by Jeremy Briggs at 7:00 am