The Sloperian: A New Fanzine About Old Comics While weekly humour comics always had a lot of comic strip pages, in the days before original Eagle appeared in 1950, boys weekly adventure comics were light on comic strip pages and heavy on text story pages and were known as "the story papers". 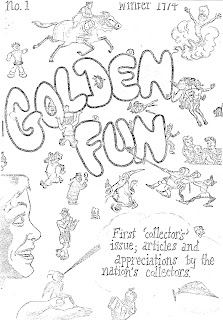 Yet for most comics fans the story paper era is an all but forgotten mystery, dating as it does from the time when their grandparents were young, while the intervening years, as well as wartime paper recycling, have left few copies of the titles available for collectors to find.

Information on them is equally hard to find and much of it comes from the older comics fanzines such as Alan Clark's Golden Fun which ran on and off for 19 issues between 1974 and 1989. Alan also wrote various comics reference books published in the 1980s and 1990s. 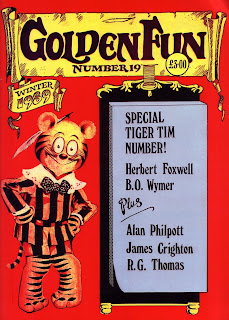 So it came as something of a surprise that now, over twenty years after the last issue of Golden Fun appeared, Alan is back with a new comics fanzine entitled The Sloperian which concentrates on those early days of British comics.

At the moment, The Sloperian is only available from Alan Clark via eBay and the cost is £5 including UK postage. Hopefully it will soon have a website or a blog that we can point you to but, until then, if this eBay link is outdated by the time you use it just try searching for 'Sloperian' on the sales site - we doubt that much else other than this fanzine will appear for that search.
Posted by Jeremy Briggs at 12:30 pm