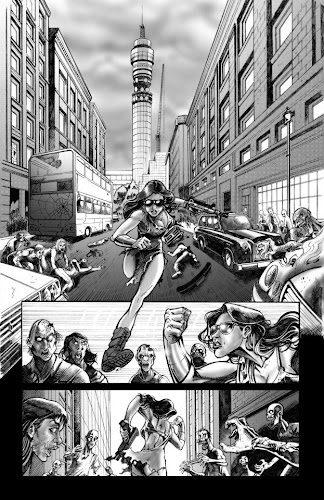 (via Mark Beer): Illustrator and comic artist Mark Beer has dropped us a line to tell us he's collaborating on a digital zombie comic that will be promoted with a 'Zombie Walk' at the end of this month.

Written by Dean Mitchell with art from Graham Williamson and Renzo Rodriquez, Killer B*****s of the Zombie Holocaust is a road trip following Laura and Sarah as they battle through a game controlled by a group of people inside 'The Dome'.

Inspired by the likes of Planet Terror, Battle Royal, Lost and even the game Mass Effect, Killer B*****s of the Zombie Holocaust is a story about two incredible girls and their fight for survival in a game unlike anything else and a truth that is as unique as the title of the series!

Mark Beer is drawing covers for the comic, which is to be distributed online via Facebook, Twitter and a website currently being created. "The comic is also interacting with readers like never before," adds Dean. "The girls take photos during the episodes that are then drawn and uploaded to twitter, before each episode readers can vote on what they want the photos to be of, and then this will actually be written into the comic."

Another interactive feature is competitions with prizes like becoming a character, this has happened already in a mini episode and it proved massively popular.

The comic is planned to be released 26th April 2012 alongside an organised zombie walk on Southbank, London, planned as a massive publicity stunt.

- For more information, check out the project's Facebook page