STRIP Magazine #2 on sale now in the UK 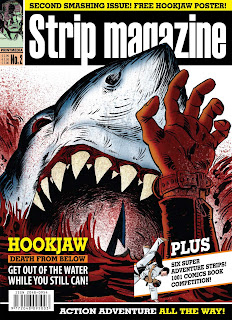 STRIP Magazine #2 is on sale now in all good UK comic shops, including many offering mail order.

STRIP Magazine Issue Two, the first comics title from Print Media Productions, features a Hook Jaw cover by Rufus Dayglo, which has also been included as a free promotional poster with the issue.
This issue's line-up is as follows:

• Black Ops Xtreme Part 2, written by John Freeman and drawn by PJ Holden: the team are sent to South America to kill a dangerous terrorist!
• Warpaint Part 2 by Phil Hester and John McCrea: Mia learns more about an ancient war!
• Age of Heroes Part 2 by James Hudnall and John Ridgway: the magician Wex battles for his life against deadly monsters!
• Recovery Inc. by Michael Penick and Dean Deckard: the company is hired to retrieve a top secret stolen prototype!
• Hook Jaw, re-mastered by Jim Campbell and Gary Caldwell: Joy over an oil strike turns sour as the great white shark Hook Jaw attacks!
• 'Cold Hard Facts' - a man from the 20th Century finds the future is not the paradise he expected
• The second winner of our 'Strip Challenge' - "The Citadel Codex", set in ancient Mexico

PLUS - an exclusive interview with comic artist John McCrea, British comics news, a competition to win copies of Paul Gravett's new book 1001 Comics You Must Read Before You Die and the new collection of Alan Grant and Arthur Ranson's Mazeworld; and a sneak preview of Crucible, one of the new strips coming up next year STRIP Magazine!
You can now subscribe to Strip Magazine online at www.printmediaproductions.com at our introductory rates as advertised in Issue 1 of our new magazine.