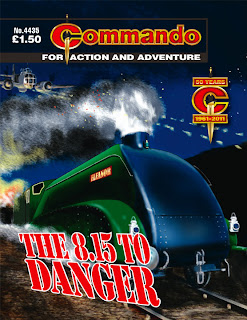 The latest issues of Commando are on sale in all ggod newsagents now, with this batch including a pair of books written by Eric Hebden and another by his son Alan - a first for the war comic perhaps.

Railwaymen were in a reserved occupation during the Second World War as their particular skills were rated so highly. That didn’t mean they didn’t have to work hard or that they could dodge danger — there were always trains to haul and air raids a constant hazard.

Driver Arthur Beckinshaw and his fireman Ernie Entwistle were two such men, happy that they were “doing their bit” even though they weren’t in uniform. Then they were sent to the Middle East where they found that engine driving was a lot more dangerous than they could ever have dreamt. 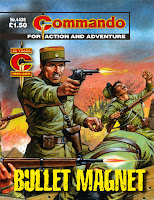 A “Bullet Magnet” — a man whose actions seem to draw hot lead in his direction. Richard Cooper was such a man, his soldiering skills such that he often raised his head too high in a scrap. But this one-time actor was to discover that there was another kind of bullet magnet, a man set up to take the hits for another. And when he found out he realised that the magnet was him! 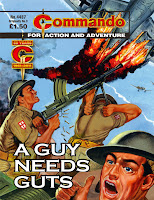 North Africa, 1942. In the Western Desert, that vast cauldron of scorching heat and flaming lead, were forged the toughest fighting men ever known — the men they called the Desert Rats.

And yet even they yielded pride of place to their truck drivers, those dare-devil fighting fools who, to keep vital supply lines open, blazed a trail of blood and glory across the Western Desert.

"One of the most difficult things about finishing a Commando story is deciding on a title," notes Editor Calum Laird in his introduction to this reprint issue. "Often we’ll start with one that doesn’t fit the finished cover or, worst of all, has been used before. I’ve lost count of the number of time we’ve come up with a winning title only to consult the records and have to chalk it off.

"When they titled Commando No 3, the field was much more open and buy did they make use of it! The cover artwork and that wording are a winning combination.

"Inside the story backs up the title. Grit determination and guts writ large. It’s a pity I can’t use that wording again." 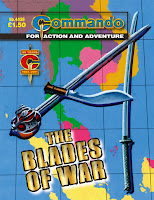 A claymore from the days of Scottish clan warfare… a Japanese Samurai sword…and the kukri of a Gurkha soldier. What was the strange bond that brought these blades together in the dark and hostile jungles of Burma?

"Certain story themes, like the pursuit of revenge or redemption, have cropped up many times in Commando’s history, and our talented writers still manage to make them seem fresh," says Deputy Commando Editor Scott Montgomery of this story. "However, I’m pretty certain that this book is the only one where a Scotsman, a Gurkha and disgraced Japanese soldier join forces in the Burmese jungle to fight a common enemy.

"It’s a tough, hard-hitting tale, this, but it is also a cracking read — a classic story of honour and vengeance, forged in the steel of battle…"

• The Draw Your Weapons exhibition featuring art from Commando continues at the National Army Museum in London this month. For the latest information visit: www.nam.ac.uk/exhibitions/special-displays/draw-your-weapons-art-commando-comics