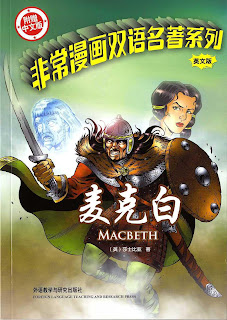 (with thanks to Clive Bryant and Jon Haward): Classical Comics adaptation of Shakespeare's tragedy, Macbeth, is to be re-published in China by its Foreign Language Teaching and Research Press, along with a number of other titles from the successful range.

First published in 2008 with art from Jon Haward and Nigel Dobbyn, the artist tells us he is "amazed and pleased" for Classical Comics.

FLTRP have produced a two-volume edition for teaching English, with one edition in simplified English and the other in Chinese Language. This allows students to use both to enjoy the story and to learn English better.

Presenting William Shakespeare's full and unabridged "Scottish play" in comic book form, the British edition was published in three formats - in original and unabridged format, and plain text and quick text editions. Set in 11th century Scotland, the story centres on Macbeth, Thane of Glamis, one of King Duncan's greatest war captains. Returning from a battle with the rebellious Thane of Cawdor, Macbeth and Banquo encounter three witches, who prophecy that Macbeth will become Thane of Cawdor and then King - and so begins a descent into villainy, involving murder, hauntings, suicide and "walking woods". 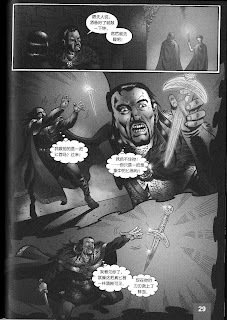 The Classical Comics range has enjoyed plenty of deserved praise since it launched, not least from classical actor Patrick Stewart, who told publisher Clive Bryant he was "fascinated" by the publisher's approach. "I find them gripping, dramatic and, although for me the original Shakespeare is always my reason for turning to these plays, I think that what you are doing in illuminating and making perhaps more lucid, especially for young people, is clever and meaningful."

Macbeth has been Classical Comics top seller since its release, Jon tells us. "I'm very proud for the team," he says. "We all worked hard on that book."

"We're hugely excited about the publications and working with FLTRP in China," publisher Clive Bryant told downthetubes, "and it's thrilling to think that our books are not only helping with the learning of English but are also forming mental imagery of the characters and scenes within these original plays and books. The image of Macbeth drawn by Jon Haward, or Miss Havisham by John Stokes, or Frankenstein's monster by Declan are all entering the minds of Chinese readers. It's mind-blowing!"

This isn't the first foreign publishing deal for the title, either. "We have had editions of our titles published in other languages, too - Swedish, Croatian, Turkish and Portuguese, plus we've had a lot of interest from other territories that we are pursuing," says Clive.

"Macbeth sold out in Turkey in six weeks and it's now out in Sweden," adds Jon. It's going global, which is fab news, not just for us but for British talent being seen abroad. Awesome, exciting times!"

next month, with An Inspector Calls

(adapted by Jason Cobley with art by Will Volley) soon after.

(drawn by John Stokes, who did a wonderful job on Great Expectations), followed by Julius Caesar: Original Text

, with stunning art by Sean O'Connor, inked by Gary Erskine.