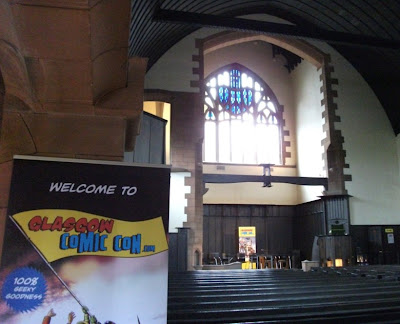 Glasgow as a city has something of a reputation - and some so-called supporters of its two football teams haven't exactly been helping matters recently. So, based on this, what were we expecting at the inaugural Glasgow Comic Con that took place last weekend?

The editors of Clint and Wasted going nose to nose over who's magazine had the most extreme content?

The Primeval fans on one side of the venue chanting S Club 7 songs trying to drown out the chants of the Doctor Who fans on the other chanting Billie Piper songs?

The police having to intervene in the standoff outside the venue when Marvel fans (armed with toy Thor hammers) taunted DC fans (with knuckledusters made out of plastic Green Lantern rings) over the failure of the Wonderwoman TV pilot?

Hardly - the first comic convention in Glasgow in some fifteen years was a friendly, good natured, if somewhat jam-packed affair. 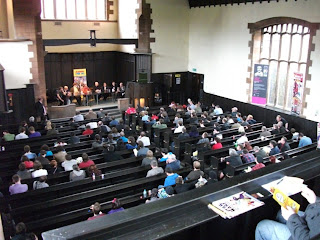 It was set in the deconsecrated Queen's Cross church which was designed by noted Scots architect Charles Rennie Mackintosh and, though less than imposing on the outside, the church proved to be imposing on the inside as demonstrated by the number of wide mouthed looks from attendees as they entered. The main church had wooden pews a plenty for the attendees to see the stage which was set in the old Chancel area behind the Rood Beam and all the guests and organisers managed to avoid the temptation to go into the pulpit. The back of the church had tables for small press and some artists while the majority of the dealers tables and the rest of the artists were in the small church hall at the rear of the building. The long narrow room of the building's library was also used to squeeze in some more small press tables.

While it was not the most unusual comics convention venue, the Ashton Memorial in Lancaster springs to mind for Lancaster Comics in 2006, it certainly made for a more interesting venue than London's Excel Centre or a generic hotel suite. However the dealers and small press rooms were cramped for the number of people attending and the event really could have done with a sales and signing area that was similar in size to the main church. It will be interesting to see how the organisers resolve this if the event returns next year.

The main programme consisted of multi-speaker talks which ran for an hour or so each and covered Getting Published/Small Press as well as the usual Artists Talk and Writers Talk. All were good humoured and well attended with signings on stage immediately afterwards. I missed the chance to look in on the Portfolio Reviews and the Writers Workshop taking place on the small upper balcony which, with its tiered pews, must have been an interesting experience. 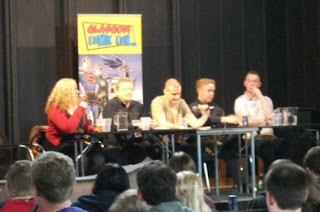 While Chilean volcanoes prevented artist Frank Quitely from making it back in time from Argentina and writer Mark Millar's appearance was relatively brief (although he manfully ensured that everyone who wanted an autograph after the Writers Talk got one), the guest list remained impressive including artists David Lloyd, Gary Erskine, Jamie Grant, Jon Haward, Colin MacNeil and Stevie White, and writers Jim Alexander, Emma Beeby, Martin Conaghan, Alan Grant, Ferg Handley and Gordon Rennie.

The separately ticketed evening event was built around the presentation of the inaugural Scottish Independent Comic Book Awards (SICBAs). These were voted on by attendees to the Con based on creator nominations shortlisted by a group of professionals and fans. On the night the Best Publication was Burke and Hare, originally published by Insomnia, written by Martin Conaghan and illustrated by Will Pickering, Best Writer was Martin Conaghan for the aforementioned Burke and Hare, while Best Artist was Alex Ronald for Vampire Vixens of the Wehrmacht in Wasted. The Achievement In Comics award went to Alan Grant. 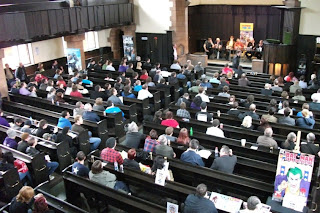 It does have to be said that the SICBA organisers need to get their awards more widely known and publicised beforehand for them to be considered Scottish rather than merely Glaswegian, however all were deserving winners with Vampire Vixens more than good enough to have its own publication while full marks must go to the Burke and Hare duo for managing to get stocks of their book back from Insomnia when the company collapsed in acrimony and so were able to continue promoting and selling it when the rest of Insomnia's stock appeared to end up in bargain bookshops.

Overall the first Glasgow Comic Con was a success, sold out on both dealers tables and attendee tickets long before its doors opened, and its organisers, Sha Nasir and John Farman, deserve a lot of praise for their efforts in bringing a convention back to Glasgow after such a long interval.

There are a selection of photos from the convention available to buy as prints from professional photographer Juliebee's website.
Posted by Jeremy Briggs at 3:00 pm