Grant Morrison in Glasgow in July 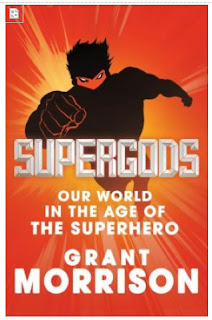 Glasgow's Forbidden Planet International has secured something of an exclusive next month, with comics writer Grant Morrison in store on Thursday 14th July signing his new book, Supergods: Our World in the Age of the Superhero.

Published by Jonathan Cape, Supergods is described as "a mind-bending journey into the world of the superheroes".

In 1938, the first US superhero comic ever published, Action Comics #1, introduced the world to something both unprecedented and profoundly familiar: Superman, a caped god for the modern age. In a matter of years, the skies of the imaginary world were filled with strange mutants, aliens, and vigilantes: Batman, Wonder Woman, and, later, the Fantastic Four, Iron Man, and the X-Men – the list of names is as familiar as our own.

In less than a century they’ve gone from not existing at all to being everywhere we look: on our movie and television screens, in our videogames and dreams. But why?

For Grant Morrison, these heroes are not simply characters but powerful archetypes whose ongoing, decades-spanning story arcs reflect and predict the course of human existence: through them, we tell the story of ourselves. Morrison draws on history, art, mythology, and his own astonishing journeys through this alternate universe to provide the first true chronicle of the superhero – why they matter, why they will always be with us, and what they tell us about who we are.

The signing is not a ticketed event but Forbidden Planet Glasgow anticipate a large number of attendees and advise queueing early to guarantee admission.

• More info on Facebook here
Posted by John Freeman at 7:00 am