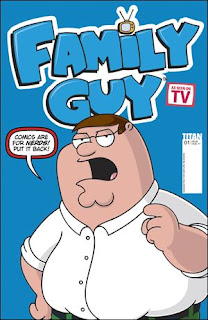 Steve White, editor of Titan Comics new Family Guy comic - which launches next month in the US and in August in the UK - says the comic will not only uphold the TV tradition of the Emmy-nominated animated show but delve deeper into the characters and comedy of Peter Griffin, his family, and friends.

"The Family Guy universe is an amazing wellspring of ideas to plunder," Steve told the Toledo Blade this week. "It’s given us a lot of latitude to develop stories ranging from one-page gag strips to more extended full-length scripts and pretty much everything in between."

The title has had a long gestation period - Editorial Director Chris Teather has been suggesting the comic for years. Ultimately the concept gained traction with Fox."We felt that Family Guy TV show to Family Guy comic was a natural progression, but Fox needed a little convincing,"says Steve. "In the end, we winged it and did a two-page comic strip off our own back and that actually seemed to do the trick."

One of America’s favourite animated TV shows of all time, Family Guy boasts over 27 million fans on Facebook, and has been nominated for 13 Emmy Awards including Outstanding Comedy Series.

Although Steve would be delighted if creator Seth McFarlane would write material for the comic but, so far, he's not committed. But the editorial team - all fans of the series - are definitely committed to ding their best to making it a success.

"We’re not just paying lip service to the show," Steve insists. "We’re really immersing ourselves in it."


• Family Guy comic #1 will be on sale and available on US newsstands and in specialty comic book stores beginning on 27th July 2011.

• Follow @FamilyGuyComic on Twitter where news on the comic series will be revealed on a regular basis.
Posted by John Freeman at 1:05 pm