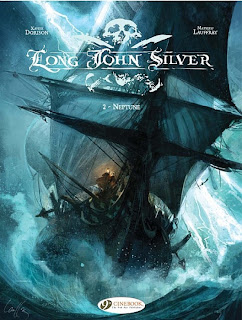 Literature's best known pirate returns in Neptune, the second book of the ongoing story of Long John Silver written by Xavier Dorison and illustrated by Mathieu Lauffray. In the first book Lady Vivian Hastings employed Silver and his men to work for her aboard her brother-in-law's ship which is taking them to South America and the lost treasure city of Guiana-Capac.

While Silver beguiles the crew with his stories, Lady Vivian's maid is killed in what appears to have been an accident below decks. As the tension on the Neptune increases, young Jack O'Kief is blamed for the death and sentenced to the lash. Refusing to admit to something that he knows was not his fault, O'Keif passes out after 10 lashes and is taken below to recover before another 10 lashes the following day. That night as Neptune sails into an enormous storm and, threatened by Doctor Livesey that he will expose him, Silver makes his move to take control of the ship. 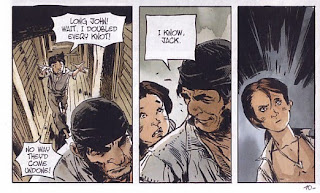 The previous book had both time and geography to play with in the setting up of the story and the locales it took the reader through before boarding the ship. Writer Xavier Dorison used them well to set up both the story and its vast array of characters and their various motives. By contrast the events in Neptune take place in both the confines of the ship itself and in over little more than a 24 hour period, yet in no way does this detract from the story. Indeed if anything this adds to the powder keg atmosphere on board the ship as certain characters jockey for power and the body count rises. 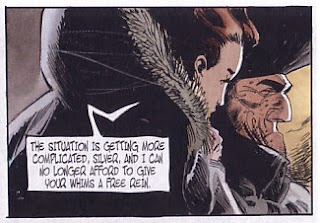 Dorison's script is well served by Mathieu Lauffray's moody artwork. From one night, through the next day and into the stormy night beyond within the confines of a sailing ship, Lauffray's work is never once repetitive and never less than exciting. As the wind rises the visual angles within his panels take on a life of their own as the ship sways to both the external and internal storms taking place.

Long John Silver - Neptune continues to build to the foundations laid in the first book and raises this series from the great to the excellent. For readers who enjoyed The Chimpanzee Complex for its complex and mature scripting along with fine artwork in a limited run series, then Long John Silver really should be you next port of call.

There are more details of the Long John Silver series on the Cinebook website.

There are more details of the original French language versions of Long John Silver on the Dargaud website (in French).
Posted by Jeremy Briggs at 7:00 am