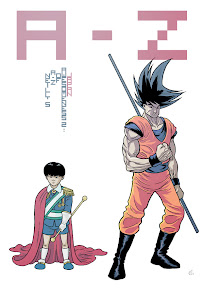 Top comics artist Neill Cameron has begun a comics project on his blog to help raise money for Japanese earthquake and tsunami victims.

Describing the 'Awesome Japan' as "my small bit to help", Neill will be drawing and posting a picture a day, one for every letter of the alphabet, of Things That Are Awesome.

His fans have been invited to join in, by suggesting things for him to draw in comments on his blog,  twitter feed or on the A-Z of Awesomeness Facebook Group. "Feel free to suggest anything you like from the worlds of Manga, Anime, Gaming, Movies, Music," he says, "and I will attempt to draw the best suggestions."

There are bonus points for alliteration, he adds, "and it might be nice to get a bit of cross-cultural exchange going on in there.

"If, for example, for 'D' you were to suggest Doctor Who and Doraemon Dunking Donuts Daintily, well then I would probably have to draw that. You get the idea.

"I did something like this once before and people seemed to like it," he continues, "so I thought I'd try it again but with a couple of differences: 1) this time we'll be focussing on the insanely rich field of Japanese Things That Are Awesome, and 2) I will be asking people to sponsor me in this endeavour.

"Please do chip in if you can! This is going to be rather a lot of work and if no-one sponsors me I'm, uh, going to feel totally stupid.

"I've set up a JustGiving page where you can go and support the project, at http://www.justgiving.com/neillcameron. All money raised will go to GlobalGiving's Japan Earthquake and Tsunami Relief Fund, where it will be used to support organizations providing relief and aid to victims."

• Check out Awesome Japan on Neill's blog
Posted by John Freeman at 12:13 pm