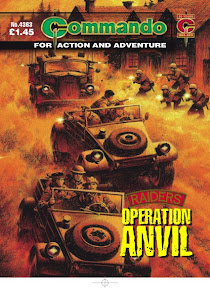 Four new Commando comics are on sale now in all good newsagents - here's the intel... Don't forget, downthtubes has a special offer on Commando subscriptions - check out the ad elsewhere on this page

Ramsey’s Raiders are in the bad books after a little fun at the expense of some arrogant American troops during a routine training exercise. There again, Captain Jimmy Ramsey and his Special Raiding Force team were never really ones for sticking to the rules.
Every cloud has a silver lining, though, because it gave them the chance to get back to business with a dangerous mission to Norway — one that would provide an unexpected opportunity to settle a score with an old enemy… 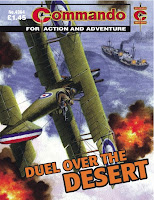 High above the arid deserts of Egypt during the First World War, two Royal Flying Corps officers in their RE8 biplane were carrying out vital reconnaissance missions over the positions of their Turkish enemies.

All was not running smoothly, though. Lieutenant Tim Blake was a decent enough pilot but got nervous under pressure. And he was teamed up with an abrasive know-it-all observer, Lieutenant Danny Woods.

So far, it looked like a recipe for disaster. Could they ever stop fighting each other long to concentrate on the enemy? 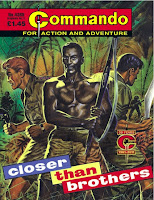 What a trio! Tom, Dick and Harry. Three ordinary names, but what extraordinary blokes.

A Scottish captain, an English sergeant, and a corporal from the West Indies, they were probably the closest pals ever known in the British Army.

And what fighters! No matter the odds, nothing was ever known to stop them. Between them they had all the guts in the world.

What a band of brothers! What a trio to belong to! Join them in this, the first of their amazing stories, told just as it happened…

• This story has never been re-issued before in any format — it’s a genuine classic from 1961 re-produced as closely as the Commando team can manage to the original. 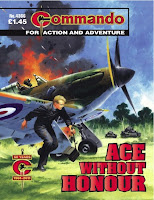 It should have been an honour to fly as wingman to Philip Templeton. Wasn’t he “The Shark” — the sleek, efficient, deadly fighter ace? His boyish charm and good humour had won him many admirers, so why feel uneasy?

Could it be you saw the other side of the man, the cold, calculating glory-hunter who let nothing stand in his way, even murder? If the victim were an enemy in time of war then that could be understandable, but what if The Shark’s next victim was his wingman? That’s right — you!