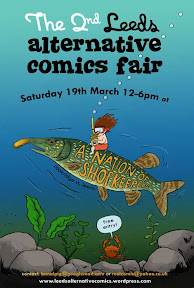 "We were very pleased with the way the first fair went last September and it seemed that the exhibitors, visitors and the venue were all happy, so we have decided to keep the format largely the same," says Steve. "The fair will keep its intimate scale and we are pleased that the majority of the creators we chose last time will again be selling their creations.

As before, the event will focus on creators from the North: from the North East will be Gary Bainbridge, Andrew Waugh and Ben Clark, from Manchester will be Adam Cadwell and new to the fair will be John “Scary Go Round” Allison from Oldham. Everyone else is from Leeds and West Yorkshire: Steve Tillotson and Hugh Raine, Helen “Memo” Entwisle, Krystina Baczynski, Geof “Fetishman” Banyard, Dr Simpo, the Black Dogs collective and another newcomer to the fair, Huw “Lem” Davies. The only exception is Gareth Brookes who, although from London, is an honorary Northerner for the day!

The event promises to be a fun, relaxed environment in which comics fans and the uninitiated can browse and buy comics direct from the creators, without entry fees or table costs and we're sure A Nation of Shopkeepers will again be the perfect venue. It also hosts the “Doodle Booze” drink and draw events run by OK Comics and is a popular gig venue that holds up to 850 people, with great food and drink.”