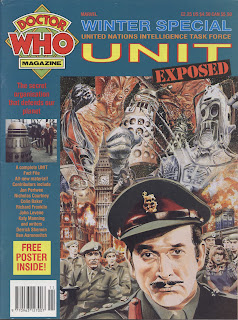 We're sorry to report the death of Nicholas Courtney, an actor probably best known to downthetubes readers as Brigadier Lethbridge Stewart in Doctor Who, after a long illness. He was 81.

I met Nicholas Courtney many times during my editorship of Doctor Who Magazine and he will be remembered as an absolute gent: always helpful, regularly able to regale fans with stories of his time on Doctor Who.

He was extremely helpful to me, as leading member of Equity, in helping out with contacts for actors who the Magazine owed payments for BBC photo use, and willingly gave up his time for interviews for the title.

He was also happy to let us feature him in both comic strips and in illustrations, such as the cover, above, for the 1991 Doctor Who Winter Special and the art below by Paul Vyse, used to illustrate an encounter between him and the Sixth Doctor, specially written for the Magazine by Colin Baker himself.

As the team over at Big Finish note, he was warm, generous and, most of all, great fun. Our thoughts are with his wife Karen and his family at this time - he will be very much missed.

A special page to post messages of condolence will be added to the site.

• SFX: Nicholas Courtney RIP
Posted by John Freeman at 10:32 am