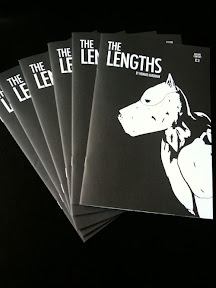 First up is Howard Hardiman, creator of Cute but Sad, whose new project is The Lengths, a black and white comic about male sex workers, based on interviews he conducted in London and funded via IndieGoGo and an Arts Council Grant.

That's followed by an interview recorded at The Cartoon Museum with Bryan Talbot, who discusses Grandville Mon Amour, the second volume of his steampunk graphic album series set in a violent turn of the century Paris.