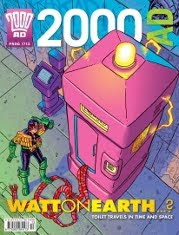 There's a rather splendid Doctor Who-inspired cover on this week's edition of 2000AD. Judge Dredd is depicted surveying a portaloo-style TARDIS with a Tom Baker-like scarf trailing out from under the door!

Drawn by D'Israeli, it's promoting Episode 2 of the Judge Dredd tale Doctor What? written by Al Ewing and drawn by Brendan McCarthy.

It's not the first time that the TARDIS has been interpreted as a portaloo. Christopher Biggins portrayed a Doctor-like character, in the Big Finish Doctor Who story The One Doctor, who used one as his mode of transport and many a jokey newspaper article has suggested that a portaloo might be a suitable design for a revamped time machine.

This cover is great fun and well worth picking up even if you don't buy 2000AD normally.

love Who
Love Dredd
Gotta love a Dredd Who mash up