Dan Dare inspired a lifetime of science for Professor Pillinger 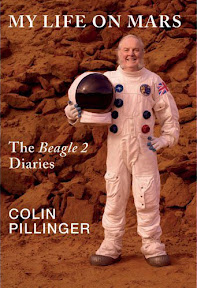 Dan Dare fans inspired by his adventures might well be interested in Professor Colin Pillinger's new book, My Life on Mars.

Colin gained his PhD from the University of Swansea, Wales, in the late 1960s , and became one of the lucky few Britons to work on the lunar samples brought back by the Apollo 11 Moon landing mission. Later, at Cambridge and the Open University, he developed techniques for classifying meteorites according to their chemical composition, and has worked on a NASA mission to collect a sample of the 'solar wind', and ESA missions to investigate how meteorites erode in space.

He's perhaps best known for his work on the European Mars Express project and the the Mars Lander, Beagle 2 and his experiences surrounding its development are a major part of the new book.

Born in 1943 and growing up in the 1950s, it should come as no surprize to learn that Professor Pillinger was inspired by reading Dan Dare in the Eagle and the BBC's  Journey into Space radio adventure serial as a child.

"Like many kids, I used to read Dan Dare comics and listen to Journey into Space on the radio," he revealed in an interview for the European Space Agency web site. "And I would draw rockets, which, of course, bore no resemblance to how they are now. It was a big surprise when I first saw that spacecraft didn’t have a point at the top and fins at the bottom!

"But I was not an anorak," he insisted in another interview for the Daily Telegraph. "When I went to class, it was to sit in the back row. School was a place to meet other kids and play football. I didn't want to be the next Einstein."

"My Life on Mars is a dual autobiography," Professor Pillinger says of the book. "Mine interwoven with the untold story (including the bits some people didn't want anybody to know) of Beagle 2. For seven years the British mission to look for life on the Red Planet captivated the public all over the World."

Stories about about the mission appeared in the media all over the World, particularly in the United States as the following extract from the book’s dust jacket reveals:

On 12 March 2010 Astronauts Neil Armstrong, the first man to set foot on the Moon, Gene Cernan, the last man to do so and Jim Lovell, who piloted the stricken Apollo 13 home, broke a journey back to the United States to attend an event at the Royal Society designed to encourage an audience of young people to follow careers in science and technology. Among the Fellows of the Society present was Colin Pillinger.

As Colin got up to leave at the end of the afternoon, he was grabbed by a US Embassy official who said “The Astronauts would like to meet you.” Of course Colin wanted to meet them but he wasn’t prepared for the greeting he received from Neil Armstrong, perhaps the best known man on Earth, “You analysed some of my samples!” Being recognised by such a trio must make Colin, a man with a passion for telling the public about science, one of the best known scientists in Britain.

Colin owed Armstrong et al. a great deal. He had come from what can only be described as an under-privileged background, via the Apollo programme to lead the ill-fated Beagle 2 mission to Mars. In 1996 he gathered around him an unlikely team consisting of the Rock Band, Blur, the country’s most controversial artist Damien Hirst, combined them with top University scientists and engineers from the satellite Industry, designed a spacecraft on the back of a beer mat, built it in a garage and set off 250 million miles to answer one of life’s ultimate questions: “Are we alone in the Universe?” Colin’s wife, Judith, named the spacecraft Beagle 2; it had the British Nation on the edge of its seat at Christmas 2003.

This then is Colin Pillinger’s story and the full, previously undisclosed, account of the Beagle 2 mission.


• For signed and dedicated copies contact the author at www.barnstormpr.co.uk


• Inside Out - 2004 BBC interview with Professor Pillinger


• The Guardian, 16th January 2009: Britain needs a real-life Dan Dare to inspire the young
Posted by John Freeman at 9:47 am