In Review: Vern And Lettuce 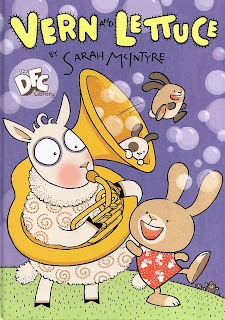 Of all the books in the DFC Library already released or scheduled, Vern and Lettuce is aimed at the youngest audience so far. Written and illustrated by Sarah McIntyre, it follows the humorous antics of Vern the sheep and Lettuce the rabbit that were originally published in the first 40 issues of the DFC comic beginning in 2008.

Living in the town of Pickle Rye, Vern works in the local park keeping the grass short and attempting to control the moles who live under the ground, while Lettuce is the older sister of five young bunnies whom she regularly has to bunny-sit for (her parents obvious breed like... well you get the idea). They both live in a tower block along with an assorted array of goats, cows, pigs and even a family of polar bears.

The book begins with a series of single page stories that introduce the main characters, their friends and neighbours and which generally set the scene for the rest of the book which is the ongoing story of Vern and Lettuce deciding to enter a Britain's Got Talent style TV contest and their journey to London which inevitably doesn't go quite to plan.

In reviewing Mezolith, the most adult of the DFC Library titles so far, I described Vern and Lettuce as sweet and having read the full book in one go I stand by that description. Although aimed at younger children it is by no means sickly sweet and while the start of the book can be a little up and down depending on how funny you find each page's punchline, it sets the scene well with Vern's ongoing battle against the destructive moles and Lettuce's attempts at entertaining her unruly siblings. This then leads into the ongoing story of the duo's trip to London to get onto the TV show Barnyard Talent. 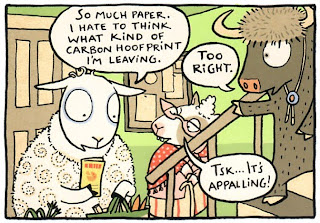 While Sarah McIntrye's other credits are as the illustrator of children's story books, as the writer as well as the illustrator of Vern and Lettuce she takes the talent show storyline that you expect to go in one simple and rather inevitable direction and twists it in a totally unexpected way into what could almost be described as an anthropomorphic Tintin or Blake and Mortimer plot. Even without this plot twist, while never blatant, there are smiles available to the more adult reader with the polar bears only moving to Pickle Rye because of global warming or Vern being worried about his carbon hoofprint.

If you are wondering why a group of the most voracious land predators on the planet are sharing a block of flats with a varied group of prey animals, or why the rabbit wears a dress while the sheep only wears a smile, then this is really not the book for you. If however you are looking for something to give the younger members of the family for their birthday or Christmas, then this comes highly recommended for them and well worth a read of yourself before you wrap it up.

• There are more details of Vern and Lettuce on the DFC Library website (along with sample pages) and also on the David Fickling Books blog.

• Sarah McIntyre also has more details of the book on her website and her blog.
Posted by Jeremy Briggs at 7:00 am