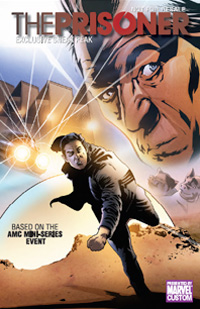 An eight-page preview comic of the new US series of The Prisoner is available to download from US production company AMC's web site here.

The AMC page also offers several posters marking the launch of the new interpretation of the 1960s cult classic series which stars Jim Caviezel (The Passion of the Christ, The Thin Red Line) as "Number Six" and two-time Oscar Winner Ian McKellen (Lord of the Rings, The Da Vinci Code) as "Number Two."

In the new series a man, known as "Six", finds himself inexplicably trapped in "The Village" with no memory of how he arrived. As he explores his environment, he discovers that his fellow inhabitants are identified by number instead of name, have no memory of any prior existence, and are under constant surveillance. Not knowing whom to trust, Six is driven by the need to discover the truth behind The Village, the reason for his being there, and most importantly -- how he can escape.

No screening date for the series on co-producer ITV in the UK has been announced as yet.
Posted by John Freeman at 10:42 am