In Review: Milk by Stref 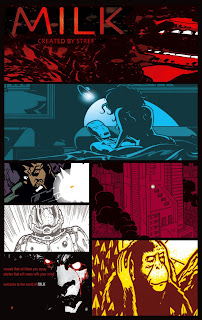 Milk is a brand new anthology from Insomnia Publications, containing the works of Stref. It consists of darkly humoured horror and sci-fi oddities, three panel strip cartoons, abstract art, and a whole host of ‘bonus features’.

Inside, you will encounter interplanetary aliens running a mafia style protection racket, a cereal company that hires hit men to deal with the ‘lucky’ winners of their competition, an astronaut werewolf on a trip to the moon, zombies, vampires, and a whole lot more.

Although the anthology is aimed at an adult audience, it also contains samples from Stref’s five years working for D.C.Thomson, featuring popular characters like Winker Watson and Dreadlock Holmes.

Stref’s art style shifts seamlessly from the bright and colourful cartoon style of the children’s comic strips, to a more gritty, angular style used on the adult strips that’s at times reminiscent of Kevin O’Neill’s work.

On occasion the artwork gets a bit too abstract in places; in the case of a vampire strip titled ‘The Need’ (which Stref has also adapted into a thirteen minute short film) the fractured art complements the stories subject matter perfectly, but on several of the other strips it makes it difficult to work out what’s going on.

For the most part however, the artwork remains clear, dynamic and oozes emotion from every pore. The strips are confidently written, often containing a Futureshock-style twist at the end.

A hefty bonus section at the rear of the anthology contains a wealth of extra features, showing Stref’s progression as an artist over the years. These date right back to his thoroughly amusing teacher progress reports from maths class in the 80’s, one of which states: ‘Stephen has undoubted ability as a cartoonist, but this is of no benefit to his maths.

At any spare moment when he is not being closely supervised he is sketching; this has led to his poor grade.’

This is a feeling that I’m sure most comic artists can easily relate to, and serves to further highlight Stref’s dedication to the comic art world.

Hopefully this anthology will bring Stref to the attention of a wider fan base that lies beyond the child friendly pages of the Beano and Dandy.


• There is currently an exhibition of original art from the book which runs to the end of September; details are here on the Insomnia Publications web site

• A write up of the launch party can be found here on the Insomnia blog
Posted by David Hailwood at 2:20 pm