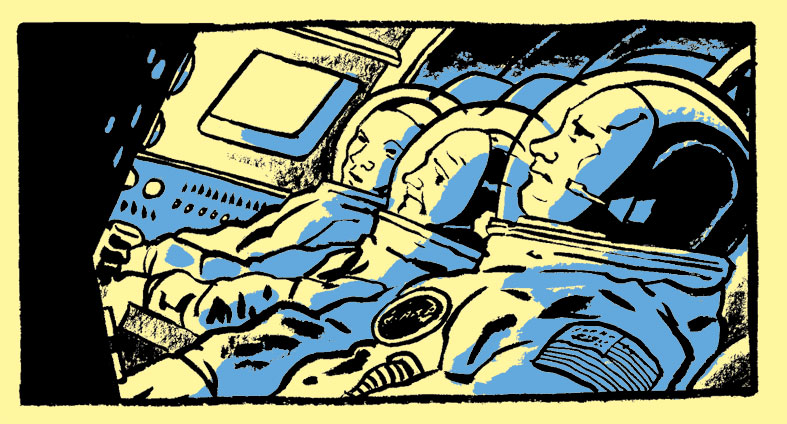 Nick should need no introduction here: his comics and contributions to British comics are legendary, with strips featured in The Times and elsewhere.

"I did this portrait of the Apollo 11 crew for a strip that ran in a DK book," he says, "but then later tweaked it just for my own satisfaction."

Nick is of course no stranger to using space travel as a story theme. His superb graphic novel, Laika

, a wonderful story inspired by the first dog in space, was released in 2007, and is highly recommended...

He's also written two Torchwood strips for Titan's official magazine, coming out next month and the month after, drawn by the excellent Paul Grist.

"Everything else I'm doing is long-term stuff," he reveals, "the follow-up to Laika for First Second, etc..." Whatever he's doing it will be worth the wait and we're delighted he found time to join in with our Moon Landing comics project.

• View Moon Landing 40th Anniversary: A Comics Celebration" - a gallery of illustrations and comic art inspired by space exploration.
Contributions are still very welcome: latest additions include an illustration by Chris Wood, who runs the British Horror Films website, and a humour strip by Paul Eldridge.

If you don't want to join our forum and upload art but would like to join in with the celebrations, simply send your work to johnfreeman6-moonlandinganniversaryart@yahoo.co.uk. Please ensure images are no larger than 2MB in size and include a brief bio and web link so we can give you deserved credit. Thanks!