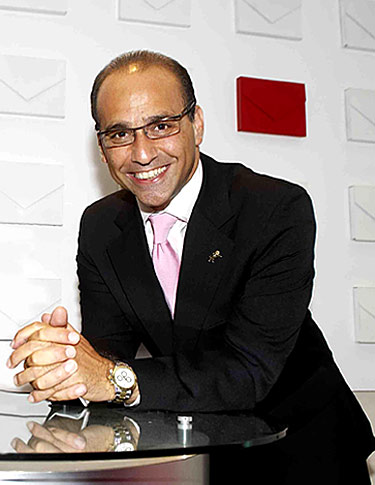 Cypriot-born British businessman Theo Paphitis - one of the judges on BBC TV's Dragons' Den - has joined Marvel Comics International Advisory Board. Comprised of business leaders from key international growth markets, the Advisory Board works with Marvel executives to explore opportunities for expanding the presence of the Marvel brand and key character franchises in international markets.

Paphitis, Chairman of the Ryman Group, is one of the UK's most high profile businessmen with an empire spans retail, property, finance and consumer goods, an entrepreneur who has become a household name thanks to the hugely popular BBC Two series Dragons' Den, entering its seventh season, in which would-be entrepreneurs pitch their ideas to investors.

Simon Philips, President, Worldwide Consumer Products for Marvel Entertainment, who serves as the primary company liaison to the Advisory Board, commented, "We are honoured to have Theo join the International Advisory Board. He is a tremendously distinguished business leader whose depth of experience and insight into the constantly evolving retail landscape in the UK and on a global level will help further our commitment to generate growth from international markets.

"Along with the other esteemed members of the Advisory Board, Theo will be instrumental in helping strengthen our international business focus and enable us to further maximize the potential of the Marvel brand on a global level."

"I've always said that business should be fun and joining the advisory board of Marvel is certainly that," says Theo Paphitis. "I will, however, be contributing my opinions to a seriously successful business. Having loved the comics, films and merchandise, I now find myself sharing them with my children and grandchildren.

Although Marvel is 70 years old, it is in its infancy in most markets outside the USA and UK and I'm looking forward to helping develop positive results in new territories."

Judging from the comments, it doesn't look as though Marvel consider any need for changes or renewed development of their brand in the UK outside their existing relationship with Panini, who publish Marvel titles here.

Mr. Paphitis made his name as a leading entrepreneur by acquiring and reviving notable retail brands - including Ryman the Stationer, Contessa and La Senza lingerie chains in the UK, Partners the Stationers and Stationery Box - turning them into profitable businesses. Theo combined the stationery businesses under the Ryman Group, where he is now Chairman. He sold his interest in La Senza and Contessa in 2006 and now retains a minority shareholding.

Mr. Paphitis also served as Chairman of the Millwall Football Club for eight years, taking the club out of financial administration, and into the Championship and to the FA Cup Final versus Manchester United and into Europe.

In 2005 he acquired Red Letter Days, the UK's leading gift experience company, in partnership with fellow Dragon Peter Jones. Perhaps they'll be able to add "A Day at Marvel Comics" to their offerings?

Earlier this year he was appointed patron for Brtian's Skillsmart Retail, the Sector Skills Council for Retail, which is committed to driving up skills levels in the industry. His special areas of responsibility are as the Retail Apprentices' Champion and for the new National Skills Academy for Retail.

Marvel's International Advisory Board is chaired by James F. Halpin, a Marvel director since March 1995, and is also comprised of Peter Yip, Executive Vice Chairman and CEO of the CDC Corporation, and Bollywood film producer, Manmohan Shetty, former chairman of Adlabs Films Limited. Mr. Yip and Mr. Shetty represent China and India, respectively on the Board. Marvel is in the process of filling one additional Advisory Board position.