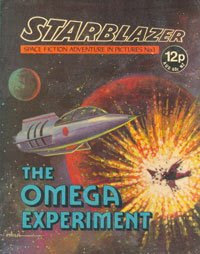 One downthetubes reader has been in touch to tell us he's offering a number of Starblazers via eBay, including the first three issues of this collectable SF comic published by DC Thomson. He tells us all of the comics are in excellent condition with no rips or tears.

Given interest in the title from our readers we've offered to plug the sale here. (Please note, downthetubes has no connection with the seller).

Talking of Starblazer, a new official blog about the comic is in development and we'll have more information on this soon.

We're also pleased to report that new content, free downloads and previews of the Starblazer Adventures game are now available over at Cubicle 7.

The Starblazer licence was picked up by British games publisher Cubicle 7 Entertainment, who also publish SLA Industries and Victoriana and the core release utilining the FATE rule system will include three detailed settings from the very best of Starblazer, detailing recurring characters, organisations, empires and aliens such as the Fi-Sci (the Fighting Scientists of Galac Squad), The Star Patrol, The Suicide Squad, The Planet Tamer, Cinnibar the barbarian warrior of Babalon and galactic cop Frank Carter to name just a few.

As well as the FATE rules system, you’ll find maps, galactic histories, stories of civilizations spanning thousands of years, technology from across time and space, details of the equipment and starships of the human civilisations and their alien neighbours. Cubicle 7 has also created some big picture gaming rules that will allow you to lead an armada or Star Empire, plan a network of secret bases, thwart a galaxy wide conspiracy, invoke ancient treaties and inspire politicians from across the universe or hold off hordes of terrifying creatures with hundreds of marines.

The official Starblazer Adevntures website features updates on the action, and releases, backstories, development news, comments from previous writers, excerpts from original scripts and will also feature exclusive interviews revealing some of the hidden treasures of the Starblazer stories.

Planned for the site are downloadable accessories, excerpts of comic strips, rules supplements, adventures, a fan community and much more bringing the Starblazer universe to life and giving you the tools to extend the gaming experience.

Starblazer Adventures will be released later this year. Join the RPG.Net discussion to follow the development process or find them at Live Journal. They also have a MySpace page

• Blazing through the secrecy
Jeremy Briggs ponders DC Thomson's secretive nature about its creators diown the years, and explores the secrets of its science fiction title Starblazer, whose creators included a young Grant Morrison and artist Ian Kennedy...
• A checklist of every issue, including known creator credits
• Starblazer Abroad
A checklist of known foreign language reprints of the title
• Behind the Lines
Writer Ray Aspden reveals his approach to writing Starblazer