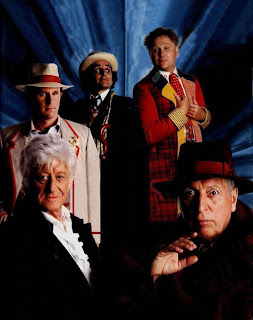 Various news sources are reporting that BBC Children in Need will be featuring a special Doctor Who episode this year featuring all seven surviving Doctors. Here's what the Telegraph has to say about it:

"The actors are getting together for the BBC charity Children in Need in a programme to be broadcast on November 14.

"An insider at the BBC said: 'It's a pretty ambitious idea and it's still being finalised. Everything is being kept under wraps but Doctor Who fans are in for a big treat.

"The first of the 10 actors to take the role was William Hartnell in 1963, followed three years later by Patrick Troughton and then by Jon Pertwee but all three have since died.The seven survivors include Tom Baker, now best known as the voice of the comedy series Little Britain, who played the role for seven years from 1974. He was followed by Peter Davidson (sic) from 1981 to 1984, whose daughter Georgia Moffett has also featured in the programme and who is now dating the current doctor, David Tennant.

downthetubes is unable to confirm anything further at present but stay tuned!
Posted by Ian Wheeler at 6:36 pm

Email ThisBlogThis!Share to TwitterShare to FacebookShare to Pinterest
Labels: BBC, Children in Need, Doctor Who