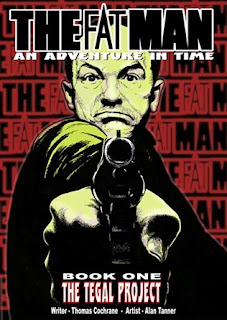 The first two chapters of the Fat Man web comic by Thomas Cochrane and Alan Tanner are now live and online at www.the-fat-man.co.uk. A new chapter being available every month.

The story centres on the mysterious 'Tegel Project', responsible for the death of millions, which threatens the very core of civilisation. Betrayed by MI5, the Fat Man finds himself caught between the blazing guns of would-be assassins and the blood-red lips of silent movie star Louise Brooks.

Unable to trust anyone and faced with a series of unpalatable choices, he careers madly along the arch of time on the seemingly impossible mission of keeping himself and his lover alive...

Originally planned as a graphic novel, Scottish artist and writer Thomas, who says the Fat Man is inspired by a fascination with the whole concept of time travel, TV shows such as The Avengers and comics such as Tin Tin, has been busy promoting the Fat Man for many months. His hard work promoting his first graphic novel is fully justified: complementing his script is some stunning pop-style art by veteran illustrator and designer Alan Tanner, who has in the past worked on covers for Time Out and the infamous Oz Magazine (and 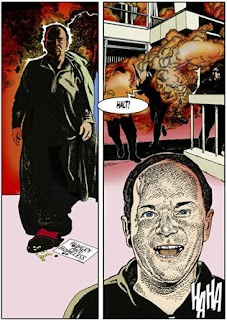 various other "hippy" publications) as well as providing many illustrations for the Radio Times and worked for CBS and Island on record covers. (Several images from the comic are available on the Fat Man web site as wallpapers for your PC).

The Fat Man is a charity project with sponsorship and free to view online. "The more eyes on the web site, the more the charity can raise," Thomas explains.

• For more information visit the web site at www.the-fat-man.co.uk, or, if you're on Facebook, join The Fat Man group there

Only, can't read it, too small.